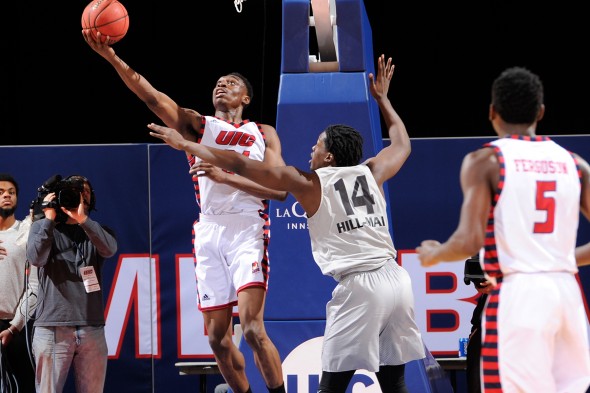 Tai Odiase led the offense in the second half. Photo: Steve Woltmann

The Flames will host their next two games at the UIC Pavilion — versus Northern Kentucky at 7 p.m. Friday and against Wright State at 3 p.m. Sunday. Students are free with i-card.

Tarkus Ferguson and Dominique Matthews paced UIC with 12 points each Sunday. Ferguson added three rebounds and a game-high six assists for the Flames. Matthews was one of three Flames with five rebounds in the contest.

The first half was characterized by a series of prolonged scoring droughts for the Flames.

UIC came out with a renewed energy to start the second half. The visitors scored the first six points of the period thanks to four points from Tai Odiase and a layup from Michael Kolawole. That cut the deficit to 18 points with 17:56 remaining in the game.

Valpo scored the next six points to go back up 56-32 and keep a big lead for the rest of the contest.