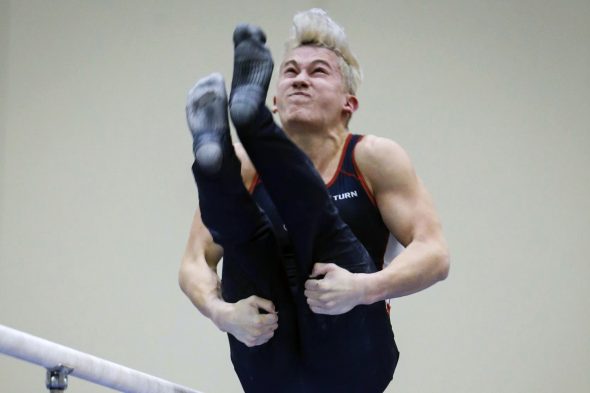 Nebraska racked up 409.350 points to capture the dual meet win.

“The season high was great, but the excitement was in the technical improvements we were able to make over the last few weeks,” head coach Charley Nelson said. “We had a lot more stuck dismounts and form improvements,” he added, noting the three bonuses his team earned. “If we keep that up, the score will follow.”

Satchel Hudson was UIC’s top scorer on pommel horse with a 12.450, his career high. He finished fourth overall.

Michael Peluso was close on Hudson’s heels at 12.300, ranking seventh in the meet.

On floor exercise, Asad Jooma turned in a performance that received 13.100 points.

Freshman Matthew Whittington was the Flames’ second-highest scorer with a 12.500.

“We had a great debut from Matt Whittington,” Nelson said.

The vault remained one of the Flames’ strongest events. The team scored a meet-high 68.050.

“Asad’s vault was his best of the year,” Nelson said.

Colby Lawson earned a stuck-landing bonus and finished with 13.600, tying with Victor Bello — the season high for each athlete.

Wes Diveney and Steen Haugsted each cleared 13 points on their routines on still rings for the first time this season.

Hardin and Peluso tied for team high honors on high bar. Each posted a 12.100.

Hudson and Bello were the only gymnasts to complete the all-around competition.

Hudson blew away his previous career high, racking up 74.000 points.

Bello competed in all six events for the first time this season and totaled 70.750 points.

UIC will compete in the New England Championships Sunday, hosted by Springfield College.