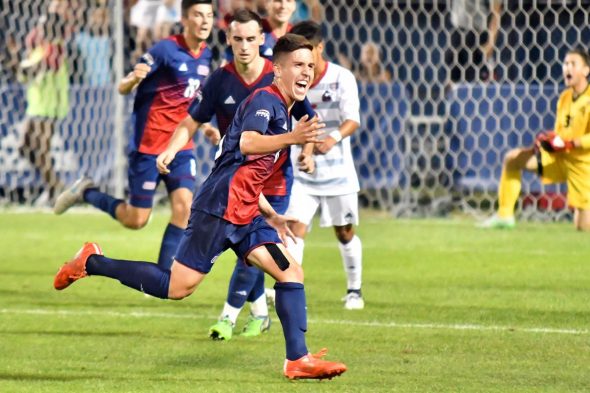 The Flames exploded for three goals in the second half, and moved to .500 in Horizon League play with a 4-2 win over Indiana University-Purdue University Indianapolis (0-9-0, 0-4 HL) Saturday in Indianapolis.

The game marked the third straight win overall for UIC (4-5-1, 2-2 Horizon League), thanks to accurate shooting from long distance, especially on two goals by Oscar Gonzalez and Peter Becht.

“Any time you can get a road win, especially in the conference, it’s a positive.  We had some very good individual and team performances,” head coach Sean Phillips said.

Gonzalez put the Flames on the board first. He headed down an attempted clear by IUPUI and cut loose with a shot that curled inside the far post. His shot from outside the box gave the Flames the first goal of the game for the third straight contest.

“We had a very bright start, we rattled the post early, and had a couple of good chances,” Phillips said. “OG [Gonzalez] takes a beautiful strike to make it 1-0. Then, we allowed them to get back into the game, the ref gave them a penalty that they converted, and to their credit they had a decent amount of the end of the first half.”

Albert Arabik put the Flames back in front three minutes into the second half. Lyes Ghezali played the ball in to him from the right wing, and Arabik put a move on his man, dribbled in and fired a shot past the keeper from 8 yards out.

“Albert Arabik came on and continued his growth as a player,” Phillips said. “He had a positive impact with a nice goal.”

Peter Becht added to UIC’s lead in the 54th minute. He fired a shot from 25 yards, and it deflected off a Jaguar defender’s head into the goal. Just after Becht’s goal, Cameron Petersen took down Joel Leon after Leon had cleared the ball, and was given a red card.

IUPUI made it a one-goal game after Sawyer Jackman made a save but allowed a rebound, which Jared O’Dell chipped over the UIC keeper. Just 18 seconds later, Gonzalez made it 4-2 with a shot from 25 yards that went just under the crossbar.

“I was disappointed that after we went up 3-1 and were a man up, we let IUPUI get back in it,” Phillips said.  “But our guys again found a way to make it 4-2, and they managed the rest of the game to get the result.”