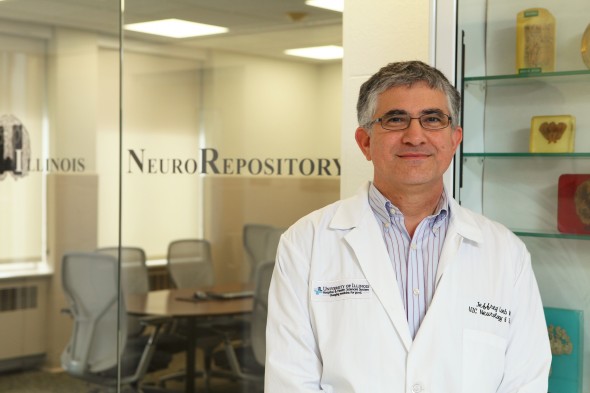 “The tissue plus its data set provides a basis for discovery not available through any other regular tissue bank or data warehouse,” says Jeffrey Loeb. (Photo: Jenny Fontaine)

UIC celebrated the opening of a unique human brain and neural tissue bank and big-data center that will help scientists uncover new cures for diseases like epilepsy, ALS and brain tumors.

The University of Illinois NeuroRepository will house tissue samples from patients treated for neurological disorders at the University of Illinois Hospital. Each specimen will be linked to clinical, radiological, electrical, histological and genetic information — “big data” that requires advanced computing hardware and software to store and query.

“There is so much information generated in the process of diagnosing and treating a patient, but most of the time, that information isn’t directly connected to any tissue samples that may have been removed from the patient,” said Jeffrey Loeb, the John S. Garvin Endowed Chair in Neurology and professor and head of neurology and rehabilitation in the UIC College of Medicine.

The data are also underutilized for research, Loeb said.

“What we want to do with the UI NeuroRepository is consciously develop protocols for capturing the right data, and linking it back to its specimen in a way that makes that rich information available to investigators who can identify new drug targets and biomarkers,” he said.

“The tissue plus its data set provides a basis for discovery not available through any other regular tissue bank or data warehouse.”

Neurological tissue is often removed for biopsy and sometimes even as part of treatment. In some cases, with prior patient consent, tissues are taken after death for postmortem examination.

“There is no better way to understand and develop treatments for human brain and neurological disorders than from those who are most affected – our own patients,” Loeb said.

By linking the data to the specimen, researchers can develop ideas based on applied mathematics and then go back to the tissue to see if their hypotheses were correct. Already, Loeb and his colleagues have used the repository to uncover a new kind of micro-lesion present in epilepsy.

“Before we remove abnormal brain tissue from a patient with epilepsy that hasn’t responded to the typical medications, we collect massive quantities of electrical information on not only the abnormal tissue, but also the surrounding healthy tissue,” Loeb said, which lets researchers see what makes the epileptic tissue different. “And by co-registering that information with the tissue it comes from,” he said, “we can go back and look for things like genetic markers or proteins that can help us uncover new therapeutic targets, or identify new pathology.”

Loeb looked for cellular changes in epilepsy by analyzing thousands genes in tissue from 15 patients who had brain tissue removed to relieve their seizures. He and his coworkers used a mathematical modeling technique called cluster analysis to sort through huge amounts of genetic information and electrical activity data collected prior to the surgeries.

Using the model, they were able to predict and then confirm the presence of micro-lesions – tiny regions of cellular abnormalities – in ‘high-spiking’ areas of epileptic electrical activity, where seizures begin. The findings were published in the journal Brain.

Dr. Qin Li Jiang, clinical assistant professor of neurology and rehabilitation medicine and director of the ALS clinic at the UI Hospital, heads a unique team of specialists that collects postmortem tissues from patients with the degenerative neurological disorder, which is also known as Lou Gehrig’s disease. The tissue, along with patient’s unique medical information, could shed light on how the disease spreads through the nervous system.

ALS is a tragic disease that eventually paralyzes the lungs, leading to suffocation and death.  Some patients at UI Health who know they will eventually succumb to ALS have consented to a rapid autopsy protocol to preserve neural tissue within three hours of death. Neural tissues change rapidly upon death, obliterating evidence of the molecules that may be the most important clues to the mechanisms and pathways involved in ALS.

“No other tissue bank has so much postmortem ALS tissue that has been collected so soon after death,” Loeb said.

The repository is also crucial to brain tumor research led by Dr. Martin ‘Kelly’ Nicholas, associate professor of clinical medicine in neurology and rehabilitation in the UIC College of Medicine and head of the brain tumor center at UI Health.

Data will be also available to computer scientists, engineers and geneticists at UIC and other research institutions.