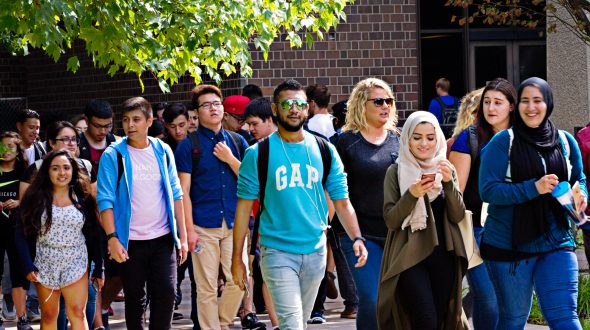 The University of Illinois at Chicago enrolled a record number of students at its campus this fall, continuing a three-year pattern. This is the result of significant increases in new freshmen (23%) and transfer students (12%), resulting in an overall 8.3% increase in the total number of undergraduate students on campus (19,448 from 17,959 in Fall 2016).

Total enrollment for fall semester, including graduate and professional students, climbed to 30,539, up nearly 5% from last year’s 29,120 students. This is the first time UIC surpasses the 30,000 student mark in its history. The size of the new freshmen class (4,064 from 3,307 in 2016) also surpassed the 4,000 student mark for the first time in UIC’s history. The figures are from the first ten days of classes, the traditional benchmark for enrollment data among U.S. colleges and universities.

Officials say the reason for the increase is that students are recognizing the quality of education at UIC and the value offered for the cost of the tuition. In addition, UIC’s role as the only public research university in Chicago is a draw to all students who want to experience a thriving urban setting and have access to 15 colleges offering a broad spectrum of programs.

“We are delighted that students are choosing – in record numbers – to pursue their educational aspirations at UIC. We are investing in building the infrastructure and human capital to meet the needs of our student population and we will continue to grow in the foreseeable future,” said Michael D. Amiridis, UIC Chancellor.

Among transfers this year were students who had graduated from the City Colleges of Chicago with an associate degree and a 3.0 GPA. They were part of the first cohort of Star Scholars program who are eligible for multi-year UIC scholarships toward their bachelor’s degree. New undergraduate transfer students increased from 1,958 last year to 2,189 this fall, an increase of 12%.

With the increase in enrollment, UIC has continued to be one of the most diverse campuses in the country. In particular, the number of Hispanic students in the freshman class jumped by 27% this year with 1,622 students making up nearly 40% of the freshman class.