Rebecca Vortman, clinical assistant professor of population health nursing science in the UIC College of Nursing, and Penny Smalley, an independent nurse consultant and director of education and regulatory affairs for the International Council on Surgical Plume, were instrumental in getting the law passed. 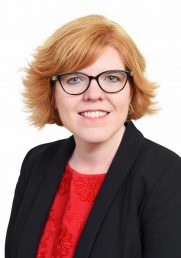 Vortman, together with Smalley, who has been advocating for surgical plume mitigation for decades, worked with the bill’s sponsors, including Senate Leader Julie Morrison, Rep. Angie Guerrera-Cuellar, and co-sponsors Sen. Laura Murphy and Rep. Natalie Manley, throughout the legislative process. Smalley and Vortman worked with the bill’s sponsors to build a grassroots coalition to get the measure passed.

Surgical smoke plume is the vaporization of substances, such as tissue, blood or fluid, into a gaseous form and is the byproduct of surgical instruments used to destroy tissue. Those instruments include lasers and other electrosurgery units. Surgical smoke contains contaminants harmful to the surgical team and patients.

Vortman’s research has added to the growing volume of studies showing the health consequences from exposure to surgical smoke. Surgical smoke plume can cause eye and upper respiratory tract irritation and has mutagenic and carcinogenic potential, Vortman explained. In her recent paper, “Empowering Nurse Executives to Advocate for Surgical Smoke-Free Operating Rooms,” published in the journal Nurse Leader, Vortman called for a state mandate requiring mitigation of exposure to the harmful health hazards associated with surgical smoke plume.

Studies have shown that surgical smoke plume can contain E. coli, MRSA, HPV, hepatitis viruses and HIV, and there is potential for the presence of SARS-CoV-2 and variants, as well as toxic gases such as benzene, toluene, carbon monoxide, formaldehyde and hydrogen cyanide. Live tissue fragments and cells, carbon and blood-borne pathogens can also be present.

“Patients are also at risk from internal absorption of the hazardous gases and particulates in plumes during endoscopic surgical procedures,” Smalley said.

Additionally, patient safety is put at risk if team members, including surgeons, nurses, technicians, assistants and students, are exposed to the plume and experience symptoms causing them to feel so unwell that they cannot provide the level of safe and effective care their patients deserve, Vortman said.

Currently, surgical facilities individually make their own surgical smoke evacuation policies and practices. The new law requires hospitals and ambulatory surgery centers in Illinois adopt policies to ensure the elimination of surgical smoke plume with an appropriate evacuation system for every procedure that generates surgical smoke plume as a result of the use of energy-based devices, including electrosurgery and lasers. The law takes effect Jan. 1, 2022.

“For me, it’s about my daughter and the current and future perioperative workforce. If my daughter decides to pursue a career in the operating room, I want to make sure she’s working in a safe work environment. I don’t want her or any surgical team members to be exposed to the harmful contaminants of surgical smoke plume,” Vortman said.

“We are so appreciative of the bill’s sponsors for their work and support, and for all the stakeholders in our coalition that contributed to this success,” Smalley said.

Vortman agreed: “We are so proud that we were two nurses who proved that our voices could be heard, and that we could effectively lead the advocacy efforts needed to get this bipartisan bill passed through a grassroots effort.”