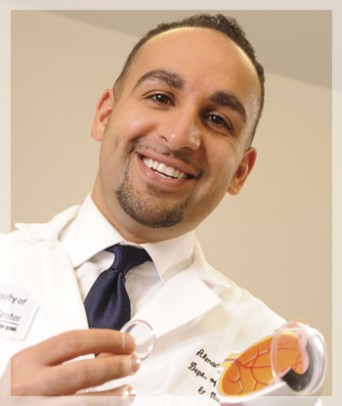 Ahmad Aref, assistant professor of ophthalmology in the College of Medicine, has received one of the greatest compliments possible in ophthalmology.

He has been named a “rising star” by the magazine The Ophthalmologist, and is listed on its Power List 2017. The awardees are voted for by the 36,000 readers of the publication.

Aref, who focuses on treating glaucoma and cataracts, is director of UIC’s Illinois Eye & Ear Infirmary residency training program. He is interested in the development of novel glaucoma surgical techniques, management of dry eye and ocular surface disease related to glaucoma medication toxicity and the improvement of glaucoma diagnosis using computerized imaging methods.

The Ophthalmologist’s Power List recognizes the most influential clinicians and researchers in ophthalmology. The 2017 list shines a light on those clinicians in the early stages of their careers with exceptional potential in their specialties.