Penalty kick is golden for Flames 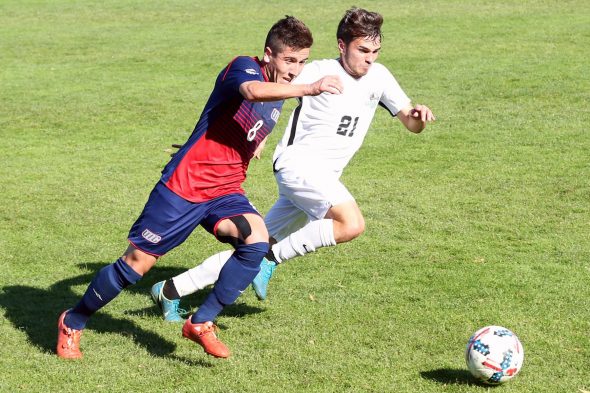 Max Todd scored on a penalty kick with just 44 seconds remaining in the second overtime Saturday to give UIC a 1-0 win over Cleveland State.

Cleveland State had the first chance for a set piece on a third-minute corner kick. UIC neutralized the threat and attacked in transition. Max Todd sent a quality cross to Jesus Perez, who forced a save by Pavle Majerle.

Shortly thereafter, UIC had three chances at a set piece. A free kick following a yellow card and two corner kicks gave them chances in the box. The Vikings’ defense was up to the task, and a couple of shots failed to find the target.

Two more opportunities came the Flames’ way in the 23rd minute. Another corner kick created action in front of the goal, but Majerle plucked the ball away from danger.

UIC controlled the majority of the second half and outshot the Vikings, 8-2, in the period. Cleveland State blocked and deflected a number of the Flames’ chances until late, when UIC played a man up due to an 81st-minute red card. Abel Guzman rifled a shot from the left flank that flew just wide of the far post. Todd tested Majerle with a would-be game winner, but the Viking goalkeeper made a save to keep the game scoreless.

With time winding down, the Flames sent the ball through the box only to have a Viking deflect it with his hand. Todd  lined up the penalty kick and blasted it straight to the back support.

Oakland will visit Flames Field for a 7 p.m. contest Saturday. The Flames will honor their seniors (Abel Guzman, Joel Leon, Sasha Simon, and Jose Fuentes) at their final home appearance.