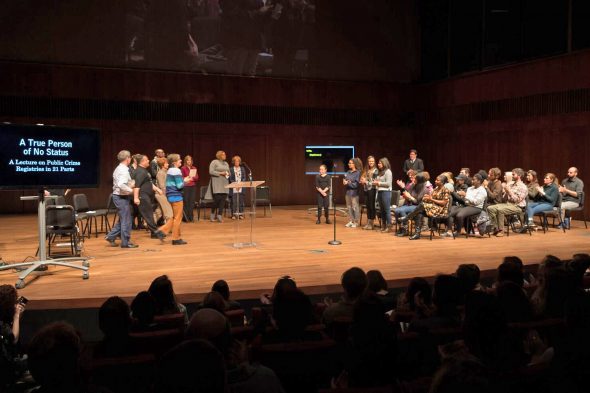 Stills from “A True Person of No Status: A Performance on Public Conviction Registries in 24 Parts.” Photo by Soohyun Kim.

A University of Illinois at Chicago assistant professor is one of eight people internationally and the only one in the United States to receive an inaugural award supporting artists to create civically engaged art.

Laurie Jo Reynolds received the Soros Arts Fellowship by the Open Society Foundations and will receive an $80,000 stipend to “realize an ambitious socially engaged art project” over the next 18 months. She was hired by the Art Department through a campus-wide social justice hire to work with local communities on human rights issues.

Reynolds is working to organize a multi-disciplinary campaign to oppose conviction-based registries, housing restrictions and exclusion zones, which destabilize families and often lead to unemployment, incarceration and homelessness. She will build community partnerships that instead advocate for policies that prevent victimization, support survivors and assist people in leading positive and productive lives after a conviction.

Reynolds is an artist and policy advocate who has had a long history working on criminal justice issues. Her work challenges the demonization and exclusion of people both inside and outside of prison. She was the organizer of Tamms Year Ten, a grassroots legislative campaign to close Illinois’ notorious state “Supermax” prison, which former Gov. Pat Quinn shuttered in 2013.

The Soros Arts Fellowship is among the highest international recognition of Reynolds’ work and shows the importance of her artistic vision and her contributions to the field of socially engaged art, said Steve Everett, dean of the College of Architecture, Design, and the Arts. 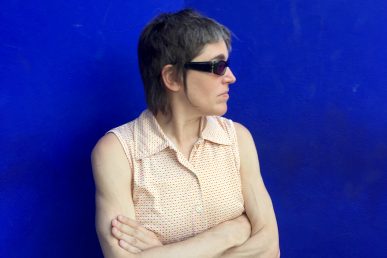 “She creates art that is a form of political or social currency which seeks to identify a social injustice to empower communities to affect change in that social condition,” said Everett. “It is an important and significant addition to the already strong research profile in social justice by the faculty at UIC.”

She continues to work with family members, people with records and elected officials to support better prison and re-entry policies. Since arriving at UIC in 2015, she has developed courses that combine criminal justice, public policy analysis, and media and art, such as Prison Aesthetics and Policy, Decarceration in Theory and Practice, and Building a Community Museum in North Lawndale. In 2016, she was awarded the UIC Silver Circle Award for excellence in teaching.

In addition to the Soros award, Reynolds is a 2013 Creative Capital grantee, a 2014 Blade of Grass Foundation Fellow, a 2015 Opportunity Agenda Communications Institute Fellow, a 2016 United States Artists Fellow and the 2013 recipient of Creative Time Foundation’s Leonore Annenberg Prize for Art and Social Change. In 2014, she completed a residency at the Museum of Arte Útil at the Van Abbemuseum, Netherlands. Before coming to UIC, she worked as staff on Governor Quinn’s re-election campaign.

The Open Society Foundations has a long history of supporting arts and culture to advance social change and recognizes the importance of artists’ contributions and the necessity of using creativity as a response to increased repression across the globe, according to the organization. As spaces for public engagement are shrinking, the arts are often the last refuge of collective imagination.

“Whether in democracies with longstanding traditions of supporting freedom of expression or in countries undergoing political transition, artists working in public spaces can contest oppression, make hope tangible, and create momentum for change,” said Rashida Bumbray, senior program manager of the Open Society Foundations’ Arts Exchange. “This fellowship acknowledges the critical role that the arts can play in confronting obstacles to open society, and we are delighted to name these eight remarkable artists as our first cohort of fellows.”

In addition to Reynolds, the 2018 Soros Arts Fellows originate from the Democratic Republic of Congo, Ghana, Haiti, Morocco, Romania, and Sudan. Each is pursuing projects of their own design — including Reynolds’ arts-based organizing campaign against public conviction registries in the United States; a citizen perspective film on life in the historically overlooked municipality of Lubunga, in the Democratic Republic of Congo; and a cultural resistance movement against the privatization of natural resources in the Moroccan Benslimane forest.

The Soros Arts Fellowship was designed with a clear awareness of the challenges faced by artists and cultural producers doing socially engaged work that is largely disconnected from the art market. The fellowship provides artists with the resources to develop a large-scale project on their own terms in their own local contexts. Over time, the Soros Arts Fellowship aims to build and strengthen a community of global allies.

art, awards, I am UIC