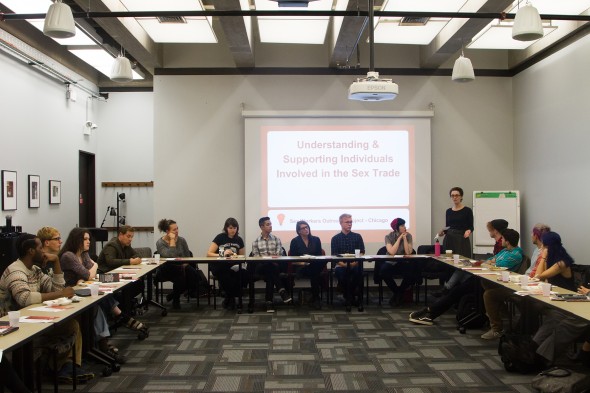 Among the reasons that people go into the business of exchanging sex for payment are choice, coercion and circumstance, according to sex workers involved in an advocacy and support group who spoke Oct. 13 at a dinner and dialogue hosted by the UIC Gender and Sexuality Center.

The event was held in partnership with members of Sex Workers Outreach Project (SWOP), who told more than 30 people who gathered at the Daley Library that while many people may be coerced into the business through threats or violence, many choose it simply to pay the bills.

“They don’t necessarily find themselves being forced or coerced, but they also don’t feel like its necessarily a choice, we call it circumstance,” said Serpent, who was with SWOP, the volunteer advocacy group that provides legal, social and support services to people in the business.

Serpent and others who spoke called for the decriminalization of sex work because laws and police agencies often target the workers with stiffer fines and penalties than the customers. They pointed to the fact that sex workers are disproportionately arrested over customers as a double standard. They also said it was wrong for consensual labor between adults to be the subject of criminal penalties solely because the labor was of a sexual nature.

Megan Carney, director of the Gender and Sexuality Center at UIC, said her group wanted to meet with members of SWOP to help assist them in their efforts to garner support for sex workers. Some members of the LGBTQ community work as sex workers and may be the target of “criminalization” by police, with trans women of color being disproportionately targeted, she said.

“How do we become the most effective allies in this, as movement work, in the way that it overlaps with other movements for social justice? These are some of the questions that motivated us to pull this together,” Carney said.

Carney told the audience that Lambda Legal — a national organization committed to advocating for civil rights of people in the LGBTQ community — had recently taken a position that they do not believe it is constitutional to criminalize sex merely because one consenting adult pays another.

Faruq Sarumi, a senior in public health, said he believes that while many sex workers may believe it is their choice to go into the business, outside circumstances often play a major role in the choice. Sarumi, who is minoring in gender and women’s studies, pointed to the mass incarcerations of African American males that often leave women alone and with no resources to provide for their families.

“There are economic and social policies put in place that affect our circumstances that construe our choices,” Sarumi said.

Amanda Goldstein, a senior in public health, said she was in Denmark over the summer studying sex work in Europe and called for decriminalization because the workers are providing a service between adults.

“They do participate in another form of work, we just don’t want to admit it,” Goldstein said. “Why shouldn’t that be legalized work?”

The UIC Gender and Sexuality Center, as well as the student organization Pride, will host a clothing drive to benefit SWOP’s street outreach programs this winter. They will collect cold weather clothing and personal hygiene products to share with workers in the East Garfield Park neighborhood.

Donations can be brought to the Gender and Sexuality Center in Room 181, Behavioral Sciences Building.