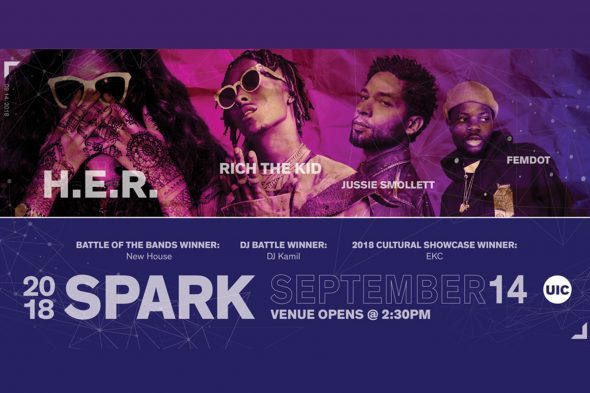 On Sept. 14, Spark will be transformed from a traditional concert to a star-studded, eclectic arts festival with a new location and female headliner for the first time in its eight-year history.

The event will feature H.E.R. and along with other professional acts: Rich the Kidd, Jussie Smollett and Femdot. Winners from UIC’s DJ Battle, Battle of the Bands and Cultural Showcase will also perform.

“We’re focusing on the festival experience,” Allen Womble, associate director of the Center for Student Involvement, said about this year’s changes.

The event begins at 2:30 p.m. at Curtis Granderson Stadium with airbrush and henna tattoos, face painting, chill zones, concession stands, and more available throughout the day.

All participants must pay for admissions. Student tickets are $10; employees and alumni pay $25; and guests of UIC community members with a valid i-card can purchase tickets for $45.

DJ Kamil and band New House will open for Evanston hip-hop artist Femdot, who was a 2018 Lollapalooza performer. Jussie Smollett will follow.

Smollett is known for his acting role in Fox’s “Empire,” which preempted the release of his recent debut album called “Sum of My Music.”

Rich the Kid will take the mic after Smollett. The rapper’s fame was catapulted by his breakout single with Kendrick Lamar called “New Freezer,” which peaked at No. 41 on the Billboard Hot 100 and inspired the “New Freezer Challenge” earlier this year. His hit “Plug Walk” earned him double-platinum status before his debut album, called “The World Is Yours,” was even released.

The winner of the 2018 Cultural Showcase, EKC, will show off their talent during a dance performance before handing the stage over to R&B artist and 2018 BET Awards performer H.E.R. — 21-year-old Gabi Wilson, who uses the acronym, which stands for Having Everything Revealed, as her stage name. Her EP “H.E.R. Volume 1,” reached No. 12 on the Top R&B Albums Charts. The track “Losing” and others from her follow-up EP have received praise from artists like Janet Jackson.

The prelude to her forthcoming debut album, which is slated for September, and her rising prominence in the music industry is exciting for some, and empowering for others, who feel she is an inspirational voice for women.

“In this time in society, when we are having more intentional conversations about how women are treated, the position of women in society, this is the way to underscore how we feel and the value that we feel around having women be center stage and equal to men,” Womble said.

All acts will tie together for an unforgettable experience.

“Spark really gives students a chance to find their friends, find their classmates, and create a lasting memory at the very beginning of the school year,” Womble said. “It’s going to be fantastic.”

For a chance to win VIP or meet-and-greet passes or for updates, friend, like and follow CSI and Student Activities Board on social media.