Students see fruits of their labor 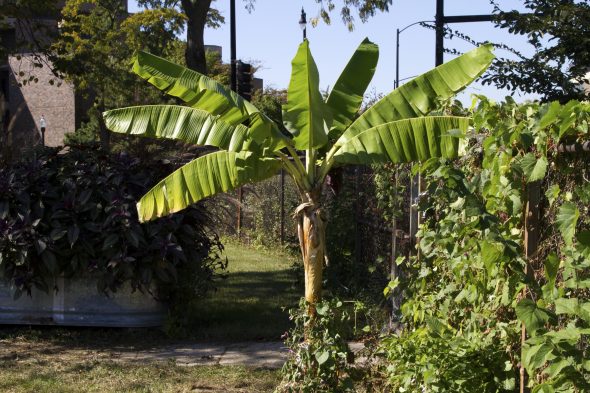 The Manila Hemp, a banana species native to the Philippines, stands at the UIC Plant Research Laboratory. (Photo: Carley Mostar)

The Willis Tower completes the scenery of a small patch of city grass at the corner of Halsted and Taylor streets, where a lone tree bears a surprising fruit — bananas.

Defying expectations, the Manila Hemp, a banana species native to the Philippines, has flowered upon planting in a foreign urban environment. The tropical plant, which was originally donated to UIC by the Chicago Park District’s Lincoln Park Conservatory, was transferred from a pot in late spring under the direction of the Plant Research Laboratory director Matthew Frazel.

The credit for the physical labor involved in the three-hour planting procedure goes to Shazia Hassan and Abdel Halloway, two passionate greenhouse workers. Hassan, a sophomore in biology, dug the hole for the tree, which stands at about 6 feet tall. She began volunteering at the greenhouse during her freshman year and is now a student worker.

Halloway is a sixth-year Ph.D. student with a focus on mathematical ecology and evolution who came to the greenhouse with a question about his dying geranium and has been a volunteer ever since.

Both Hassan and Halloway agree that the best way to learn more about UIC’s Plant Research Laboratory is to visit and ask questions.

“My overall effort has been to open the place, diversify it and people it,” Frazel said.

Over the course of the year, the lab is busy propagating plants at different stages of development. When Frazel joined the department three years ago, the greenhouse and its surrounding acre of land were virtually empty. Now, the space thrives with native prairie plants, succulents, garlic and even a beehive.

In addition to housing three faculty researcher sites, the Plant Research Laboratory hosts students through various departmental courses and educational camps. The entire facility has an open-door policy, but people who visit should be prepared to get their hands dirty.

“We try to get people to look and see things and touch things,” said Frazel. “I believe there’s a lot of value in keen observation of the natural world.”