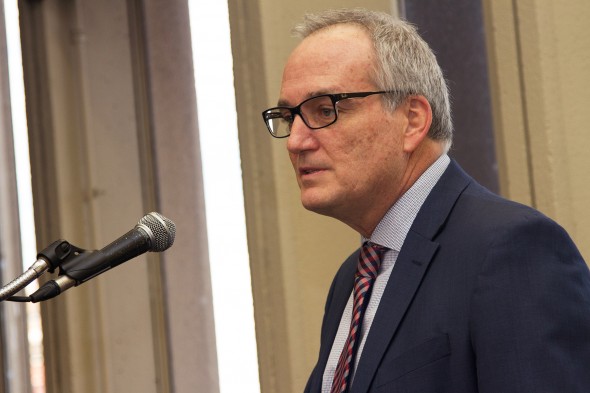 As President Trump’s executive order calls for changes in immigration policies, UIC is providing support to members of the campus community.

In an official statement released by the University of Illinois System, university leaders wrote that they were “greatly concerned about the negative consequences” of the order, which bars citizens of seven Muslim-majority countries from entering the country for the next 90 days and suspends the admission of all refugees for 120 days. A federal judge on Friday issued a temporary restraining order on the travel ban, halting enforcement nationawide.

University leaders said they would monitor events closely and work “to support and protect all of our international faculty, visiting scholars and students.” At UIC, that began with information sessions, hosted last week by the Office of International Services.

“We’re here to understand the impact of what we know today,” said James Hammerschmidt, executive director of the Office of International Services.

UIC hosted three informational sessions — two for administrators and one for members of the international community.

Hammerschmidt told administrators to expect an increase in visa delays or denials and scrutiny by federal agencies when reviewing requests for benefits. Processing slowdowns of non-immigrant and immigrant benefits are also possible. Backlogs, caused by a federal hiring freeze, could happen and administrators should be ready for more site visits, he said.

Hammerschmidt also mentioned drafted orders that, if signed, could affect every employment-based visa category, along with green cards.

In the session for members of the international community, UIC staff explained the orders and reminded participants of campus resources such as Student Legal Services and the UIC Counseling Center.

“We want to help you be as resilient as you can be to move through these uncertain times,” said Joseph Hermes, director of the Counseling Center.

Hammerschmidt offered the international community some recommendations, too, urging them not to travel outside of the United States until further notice if their home country is named in the order. Students or scholars should contact the Office of International Services before making travel plans and carry copies of documentation that prove valid status.

“It’s better to be prepared, and it’s important now more than ever that you communicate with our office,” he said.