Tackling national debt: it’s Up to Us 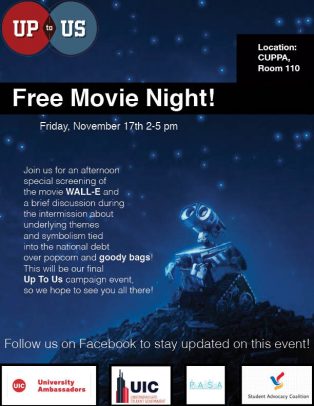 As the country’s national debt rises, three UIC students aim to raise awareness about the issue to their fellow students.

Allyson Nolde, Ali Mahmood and Natalie Jacobi are representing UIC in the nationwide Up to Us Competition. The contest challenges teams from more than 50 colleges and universities around the country with designing a nonpartisan campaign about the impact of the U.S. national debt, and engaging peers in discussion about the economic and fiscal issues facing the nation.

About 10 percent of the $19.9 trillion national debt is from student loans, so the issue hits close to home for many on UIC’s campus.

The pertinence of this issue is what motivated Nolde, a graduate student in public administration, to get involved.

“It’s important for students to be aware of the national debt because it is a number that’s growing rapidly, and student loan debt is contributing to that,” said Nolde, who is the leader for UIC’s Up to Us team.

“If we were to address the issue of student debt, we can get students to begin thinking about the bigger picture to work towards a solution to national debt so we can work toward a better future.”

The enormity of the debt is what sparked the interest of Mahmood, a senior in computer science.

“When I first heard, I didn’t know how severe the national debt is,” he said. “I was very surprised at how much it’s increased — in the last 10 years alone it has almost doubled.”

As a part of the competition, the team is encouraging students to sign a pledge to help find a nonpartisan agreement to end the national debt. They have hosted two events on campus, with a third event on Friday. The group will host a free movie screening of Wall-E from 2 to 5 p.m. Friday in Room 110 CUPPA Hall. The screening will include a talk about the film’s underlying themes and symbolism that ties into the national debt.

They have also presented their cause for classes on campus and online.

As the severity of the debt increases, the team is focusing on mobilizing students to spread the word on the issue.

“All we’re trying to do is raise awareness,” Mahmood said.