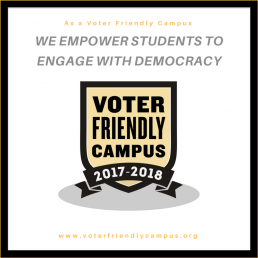 After a year of meticulous planning, execution and evaluation, UIC has officially been named a Voter Friendly Campus.

The designation, which was given to 83 campuses nationwide and only one other university in Illinois — Northeastern Illinois University – honors universities pushing to get students out to register and vote.

UIC’s recognition was the product of campus-wide teamwork, as Student Leadership Development and Volunteer Services, the department of political science and Institute for Policy and Civic Engagement aligned to spearhead the campaign.

“Before now, there wasn’t really any unified effort around democratic engagement,” Long said. “There had been pockets of stuff, but there had never been a true, unified university effort. So, what we named ‘UIC Votes’ was that effort.”

To be awarded voter-friendly status, universities had to design a workable plan that engaged students, then execute it and evaluate to see if better practices could be implemented.

Debate watch parties and Rock the Vote events were vital to informing students on the issues and executing the plan’s educational aspect.

“For us, it wasn’t necessarily who you voted for, it was the idea that you were informed on who you were voting for,” Long said. “We were trying to provide as many opportunities for that as possible.”

Providing more opportunities to register was also a focal point. At orientation, 41 percent of incoming students registered to vote.

Asha Binbek was among students who regularly organized registration sites at Daley Library and Student Center East throughout the fall semester. In total, UIC had 1,600 newly registered students.

“We want to make sure that we pushed efforts to make sure students were using their right to vote,” Binbek said. “But registration comes first, and we wanted students to know even if they didn’t want to vote, registering would give them the option in case they changed their minds.”

Improving student engagement is a step toward one of the larger university goals: accentuating UIC as an active, influential campus in the city.