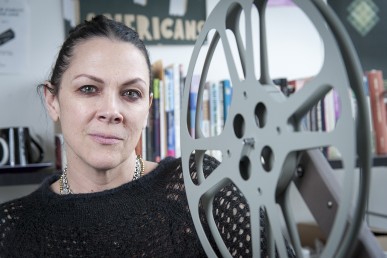 Jennifer Reeder, professor of moving image and acting director of the School of Art and Art History. Photo by Jenny Fontaine.

Two filmmakers from the University of Illinois at Chicago’s School of Art and Art History have earned awards this week that will help them create new projects.

Jennifer Reeder, a professor of moving image and the acting director of the School of Art and Art History, was named a recipient of the Wexner Center Artist Residency Award by the Wexner Center for the Arts at Ohio State University.

The center awards a total of $200,000 yearly to contemporary artists across the center’s program areas: visual arts, performing arts and film/video.

Along with the financial award, the artists benefit from technical, professional and creative support, as well as having support on-site to help assist in the creation of new work. In addition, the artists engage with faculty and students to share their experience in the creative process, according to Wexner Center officials.

Reeder will receive $15,000 — in addition to $25,000 worth of services — to assist in post-production editing, final sound mixing and color correction on her next film, “As with Knives and Skin.”

Reeder’s film follows the investigation of a young girl’s disappearance in the rural Midwest, led by an inexperienced local sheriff. Unusual coping techniques develop among the traumatized small-town residents with each new secret revealed.

“This mystical teen noir presents coming-of-age as a lifelong process and examines the profound impact of grief,” said Reeder, a native of Columbus, Ohio.

Shooting for the film will take place in June in Chicago, Reeder said. 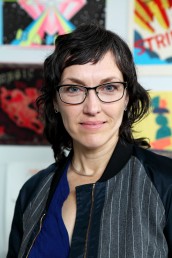 Deborah Stratman, UIC associate professor of moving image and head of art in the School of Art and Art History. Photo by Jenny Fontaine.

Deborah Stratman, a UIC associate professor of moving image and the head of art in the School of Art and Art History also received accolades for her work by the Sundance Institute’s Documentary Film Program.

“At a time when the independent voice has never been more necessary, learning from artists about how we can better support and sustain their creative process so that they can describe the world truthfully and powerfully is not a luxury but a necessity,” Jackson said.

Stratman received $10,000, which will go toward work on her future project, “Hello Ladies,” a documentary hybrid that looks at women’s language, gesture, rhythm and public voice as modes of resistance. The film, described by Stratman as “science-nonfiction,” is set in the Afar Depression region in Ethiopia and Washington, D.C., and is a celebration of alternative voices and radical women asking, “Who speaks? Who gestures? Who makes? Who gets heard?”

“The grant means I can start, which is more than half the battle especially for an overseas film,” said Stratman. “The visibility of an institution like Sundance is also substantial. They have such a massive network, it helps prime the pump for future fundraising and exhibition opportunities.”

The Art of Nonfiction Fellowship encourages the creative process of boundary-pushing nonfiction filmmakers and includes an unrestricted direct-to-artist grant. The Art of Nonfiction Fund supports pioneering artists at the forefront of creative nonfiction filmmaking, provides grants annually to filmmakers developing a project that takes on an inventive cinematic approach and pushes the boundaries of the form, according to Jackson.