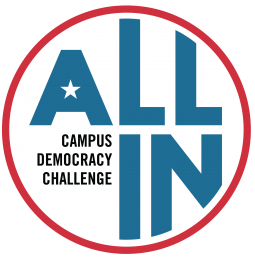 Since 2015, UIC has gone all in to get civic engagement rates up.

The ALL IN Campus Democracy Challenge is a nationwide effort to promote an active and informed citizenship on college and university campuses. Thursday was the first ALL IN Challenge Awards Ceremony, where UIC was honored with two recognitions among 296 competing institutions and 584 campuses.

UIC received the Bronze Seal for its voter participation rate between 50 percent and 59 percent in the 2016 election. The Champion Award spotlights UIC as the most engaged campus in the country.

“They speak highly of the work we’re doing at UIC,” said Spencer Long, associate director of Student Leadership Development and Volunteer Services (SLDVS). He attended the first ALL IN Challenge Awards Ceremony in Washington, D.C., Thursday to accept the awards on behalf of SLDVS and its core partners, including the Institute for Policy and Civic Engagement, Office of Public and Government Affairs, political science department, and a number of student organizations.

“This has been at the root of all the work we’re doing,” Long said.

For the past year, the group has implemented an action plan to increase voter registration, education and turnout. The plan, created by a campus-wide committee, sparked long-lasting campaigns such as UIC Votes, which has included debate watch parties, early voting and more.

The result has been a 7 percent climb in UIC’s voter registration rate and a 13.9 point jump in voter participation, from 44.1 in 2012 to 55 percent in 2016. The jump was one of the largest increases in voter participation among more than 1,000 U.S. colleges and universities, according to Tufts University’s National Study of Learning, Voting, and Engagement. The voting rate of students who were already registered also increased from 57.9 percent to 70.6 percent. Those successes and the campus action plan helped the campus earn a Voter Friendly Campus designation from the Fair Elections Legal Network’s Campus Vote Project and NASPA in March.

“We’re above the national average and we’re going to continue to work at that,” Long said.

Campus leaders will continue to encourage people to vote for midyear elections, when governors and members of the House of Representatives are chosen.

“UIC prioritizes civic and community engagement,” Long said. “We want people to listen to our views and the needs of students.”

Visit the ALL IN Campus Challenge Facebook page, @allincampuschallenge, to watch the ceremony.