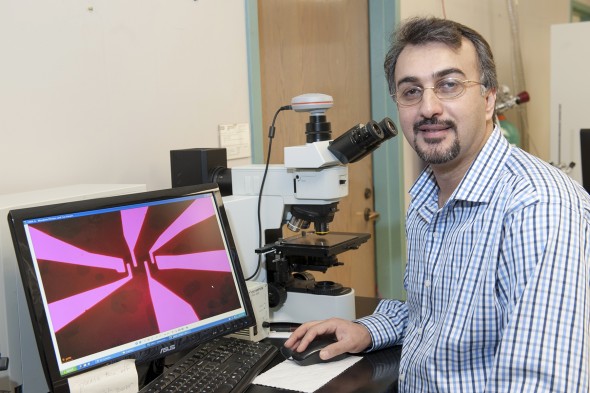 In announcing the seventh annual special issue featuring global thinkers, the editors wrote, “The Global Thinkers honored here are proof that, as a society’s pillars falter, individuals step in to bear the weight. The honorees demonstrated how private citizens can ease the suffering of others. They subverted traditional power structures to craft solutions to social, economic, and environmental problems. They pledged personal wealth to create a safer, healthier future for all.”

The profile of Salehi-Khojin, cited as one of seven “Innovators,” reads:

“For renewable resources to phase out fossil fuels, they’ll have to compete on the energy market. Amin Salehi-Khojin is pushing solar power toward that goal by ditching cumbersome storage batteries. In July, he and his team at the University of Illinois at Chicago (UIC) announced the development of a solar cell that mimics photosynthesis. The “leaf” absorbs carbon dioxide from the atmosphere and, using solar energy, converts the greenhouse gas into a synthetic fuel—at a cost roughly equivalent to that of producing gasoline. Imagine: Thousands of “leaves” clustered on solar farms, recycling emissions into clean energy. In that future, fossil fuels would be so passé.”

Watch a video on his work.