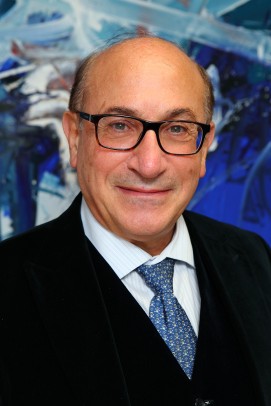 Ara Tekian, professor and associate dean of international education at the University of Illinois at Chicago College of Medicine, will receive the Ellis Island Medal of Honor at a ceremony in New York.

The award is given to those who “have made it their mission to share with those less fortunate their knowledge, courage and compassion, while maintaining the traditions of their ethnic heritage as they uphold the ideals and spirit of America,” according to the National Ethnic Coalition of Organizations, the group that gives the award. Past recipients include six U.S. presidents, former Secretary of State Hillary Clinton, Frank Sinatra, Elie Wiesel and Rosa Parks. The 2017 awardees include astronaut Buzz Aldrin, cardiologist Annapoorna Kini and CNN anchor Fareed Zakaria. The awards will be presented May 13 at a dinner reception on Ellis Island.

Tekian was born in Beirut, Lebanon. He received his PhD in neuroscience from the American University in Beirut 1981 and earned a master’s in health professions education at UIC in 1983.

“This was a very unique degree at the time, and UIC was one of the only universities in the world to offer it,” Tekian said.

He returned to the Middle East that year and became the founding director of the medical education department at King Saud University College of Medicine in Riyadh, Saudi Arabia. He later consulted for the World Health Organization and the Ministries of Health and Education to ensure that medical schools in the Middle East were adequately preparing their students to provide care in their respective countries.

In 1990, with the civil war still ongoing in his native Lebanon, Tekian left the Middle East and moved to the U.S.

Tekian joined UIC in 1992 as a visiting assistant professor of medical education and was instrumental in building UIC’s international programs.  Since then he has consulted in more than 45 countries and helped establish more than a dozen medical education departments or centers.

“When I moved to the U.S., I knew that I wanted to do everything I could to help the Lebanese and Armenian communities that I joined here in America,” he said. “When you have a shared history with people, and when you are an immigrant yourself, you have a very strong desire to help your people.”

For Tekian, that desire took the form of assisting Armenian and Lebanese students seeking to further their medical education in this country.  To them and their families, he became known as “the Contact Person.” His extensive contacts at universities in the U.S., the Middle East and Europe helped him direct students to educational opportunities in graduate and post-graduate work. He established the UIC College of Medicine’s international medical education program in 2009.

“Dr. Tekian put UIC on the map in terms of medical education,” said Dr. Robert Barish, vice chancellor for health affairs at UIC. “He is one of the main reasons why we are known as innovators in medical education around the world.”

Tekian has been widely involved in the Armenian and Lebanese communities in Chicago and throughout the U.S. and holds many leadership roles. He has been active in the Armenian General Benevolent Union Chicago Chapter for the past two decades and served as chair of its Saturday School from 1994 to 2005. He has also served as president of the regional chapter of the alumni association of the American University of Beirut from 1997 to 2001, and president of its North American chapter from 2002 to 2004. Tekian served as president of the division of education in the professions of the American Educational Research Association from 2009 to 2012.

He is currently one of the 100 Pillars of the American University of Armenia, having donated generously to fund student scholarships. He raised hundreds of thousands of dollars to support Armenian and Lebanese communities recovering from disasters, including the 1988 earthquake in Armenia.

Other awards include the 2012 Association for the Study of Medical Education Gold Medal Award, one of the most prestigious awards in medical education. In 2014, he received a lifetime achievement award from the Armenian American Medical Society, and in 2015 he was named Faculty of the Year by the UIC department of medical education.