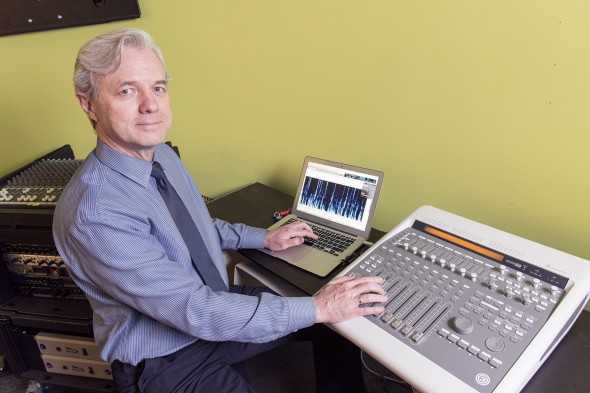 Steve Everett, dean of the College of Architecture, Design and the Arts, is among musicians featured this week at the Ear Taxi Festival.

Contemporary classical music fans will have an opportunity to hear from seven artists with ties to UIC when the Ear Taxi Festival kicks off at various locales in Chicago this week.

The classical music festival includes more than 300 musicians, work from 88 composers and 54 world premieres during its run Wednesday through Oct. 10.

The festival is in its first year and will be held in a series of concerts at several locations in Chicago including the Joan W. and Irving B. Harris Theater for music and dance, the Chicago Cultural Center, Constellation, and the Rockefeller Chapel at the University of Chicago.

Participants with ties to UIC include Steve Everett, dean of the UIC  College of Architecture, Design and the Arts; Elbio Barilari, a visiting lecturer; and Sarah J. Ritch, the college’s director of technology; Stephen Burns, UIC School of Theater and Music advisory committee member; Scott Tegge, a teaching associate; and Marc Mellits, assistant professor of music. The PianoForte Studios, which is involved in the festival, is a sponsor of UIC’s School of Theater and Music.

Burns is co-curating with Augusta Read Thomas, a Grammy-winning composer who came up with the idea of the festival three years ago as a way to give back to the profession and support the work of her colleagues.

“The open, collaborative nature of Chicago’s new music community is home to an extraordinary crop of ensembles and a vibrant landscape of composers. The scene for new music in Chicago is exceptional and I dedicate myself to leading, supporting and encouraging its sustainability and growth,” said Thomas, a professor at the University of Chicago.

She said the name for the event came from an image she had involving the famous bust of the German composer Ludwig van Beethoven.

“I had the image of a composer’s head with a line of 10 taxi cabs driving out of each ear,” explained Thomas. “Ear Taxi Festival will take you on many aural taxi rides, each one fresh, fun, engaging, and unique, and played by a huge array of world-class musicians.”

Everett’s work, “Out of the Frame,” is having its world premiere. The presentation will take the form of a sound installation, including music and interactive audio-video of his 2008 opera, “Ophelia’s Gaze,” for soprano and string quartet. The music is based on a poetry collection, Bellocq’s Ophelia by former U.S. Poet Laureate Natasha Trethewey.

The work is a narrative in which viewers are asked to engage with the imagined thoughts and perceptions of a young mixed-race prostitute in the Storyville section of New Orleans in 1912. Everett, who will also moderate an artist discussion, said the festival helps highlight the richness of new music at UIC.

“The intent of the festival is to gather all the energy and expertise of contemporary music in the city, so this was a chance to showcase Chicago in this arena,” he said. “It brings visibility to the city and contemporary artists working in the city. UIC collectively has a strong presence.”

Elbio Barilari, along with fellow composers Julia A. Miller and Ian Schneller, plan to make a U.S. premiere of their work, “Two Hundred Years of Solitude – Doscientos años de soledad,” influenced by the Gabriel Garcia Marquez novel. The Oct. 10 multimedia presentation will be at the School of the Art Institute of Chicago’s LeRoy Neiman Center.

“Dirge,” by Sarah J. Ritch, will have its world premiere when the MAVerick Ensemble takes the stage Oct. 9 at the Chicago Cultural Center’s Claudia Cassidy Theater, 78 E. Washington St.

Stephen Burns will conduct the Fulcrum Point New Music Project where three pieces will be premiered. Along with Burns, two other conductors and orchestras will be featured Oct. 5, 7:30-9:45 p.m., at the Harris Theater, 205 E. Randolph St.