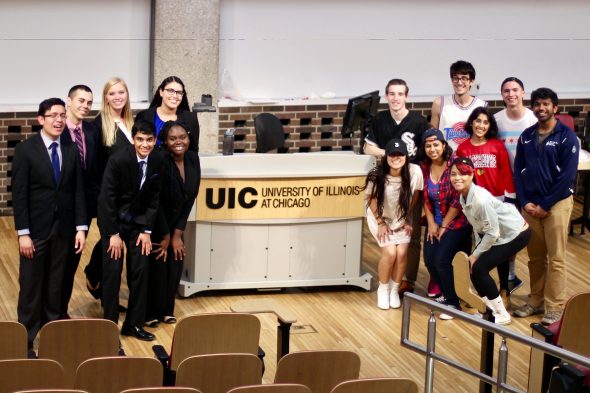 In only its second year as an official student organization, the UIC Speech Team took the initiative Oct. 21 to host Chicago Swing, one of about 100 tournaments throughout the country to qualify students for the National Forensics Association Nationals.

“We love speech and we think that the messages are super important,” said Michael Martinez, president and co-founder of the team. “Part of the reason why we wanted to host a tournament here was because we wanted to bring individuals in and see a little bit about what we do.”

The tournament, which spanned two days, was organized in partnership with Northwestern University’s speech team. On the first day, students participated in a full day of rounds at UIC, then spent the second day facing the panel of judges at Northwestern.

Planning for the tournament began in the spring with the help of Vance Pierce, associate director for student organizations in the Center for Student Involvement.

“For a new student organization, hosting a tournament can be overwhelming,” Pierce said. “UIC’s team is a student-run team, so they had to plan the event while also preparing to compete.”

The planning included coordination with campus units and surrounding businesses along with recruitment of schools from three states for the competition.

Of the nine participating speech teams, three placed in the top 5 at the NFA Nationals last year. Martinez, a junior in finance and biology, believes that this kind of exposure will further establish the credibility of UIC’s new team.

The speeches given at these tournaments often challenge many political and social spheres while advocating for underrepresented communities and progressive institutional changes, added Martinez.

“We wanted to expose the UIC community to our message,” he said.

The message has reached beyond UIC.

UIC’s team has qualified for 18 events at the NFA Nationals — more events than they qualified for throughout the last academic year.

“We’re moving a lot faster as well as doing a lot better this year,” Martinez said.

After winning the New Student Organization of the Year award, the team is looking to further its impact at UIC and on the tournament circuit with better footing, more secure funding and double the number of members.

“I would say they are a model for other organizations to get focused on both long- and short-term goals,” Pierce said. “One coach shared that in her 10 years of leading her program, she has never seen a team so dedicated and willing to do the leg work for success. From phone calls to emails, the UIC team networks to create competitive connections and partnerships.”