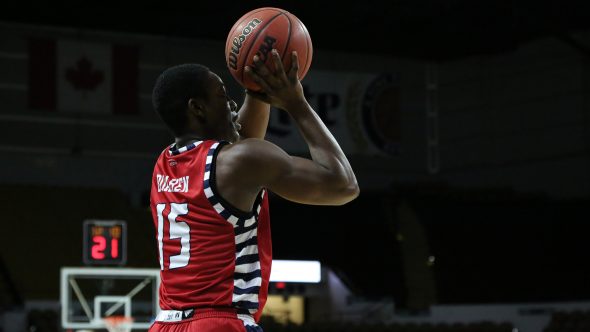 UIC has advanced to the semifinals of the 10th CollegeInsider.com Tournament by knocking off Austin Peay in thrilling fashion Wednesday night, topping the Governors, 83-81, at the Dunn Center.

The Flames (19-15) trailed by as many as 14 points in the second half. The Governors (19-15) made one-of-two free throws with 10.4 seconds remaining to tie the game and called timeout to set up the defense. Godwin Boahen took the inbound pass from Tarkus Ferguson and dribbled across the timeline. He darted inside the arc and launched a jumper with 1.4 seconds remaining that propelled the visiting team to victory.

Boahen, making his second straight start, was one of four Flames in double figures with 16 points. Ferguson led the squad with 21 points, nine rebounds and four assists.

It was the eighth consecutive road win for UIC, the most in program history. Wednesday’s victory marks the first time that the Flames have won at least 19 games in a single season since the 2003-04 campaign.