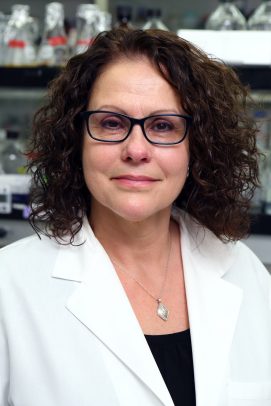 A work-study job during Angela Tyner’s undergraduate studies changed the trajectory of her career.

“When I was younger, I never thought I would be a researcher,” she said. “I took a job and learned how a lab operated, and it just looked like an exciting career choice and lifestyle.”

As an undergraduate at Indiana University, Tyner had the opportunity to attend an embryology course at the Marine Biological Laboratory in Woods Hole, Massachusetts, where she was introduced to Nobel Prize-winning researchers such as Michael Rosbash, who discovered molecular mechanisms controlling the circadian rhythm, and Tim Hunt, who identified protein molecules that control the division of cells.

“I was exposed to a lot of really exciting science as an undergrad,” she said.

Now, Tyner runs her own lab in the College of Medicine that focuses on molecular mechanisms involved in regulating regeneration of epithelial tissues, and how misregulation can cause disease.

“Many common cancers start in epithelial cells,” said Tyner, professor of biochemistry and molecular genetics in the College of Medicine.

“The epithelial lining of your gut turns over quickly; every three to four days you generate a new lining. We are interested in what controls that.”

Tyner’s studies focus on Protein Tyrosine Kinase 6 (PTK6), a signaling protein that her group identified and later showed regulates maturation of epithelial cells lining the intestine. Her lab also discovered that PTK6 is activated in human breast and prostate cancer.

The Tyner lab recently demonstrated that PTEN, an important tumor suppressor protein, inhibits activation of PTK6 and its roles in promoting development of prostate tumors.

Tyner lectures in medicinal biochemistry to UIC medical students, and co-directs the Integrative Biology course for graduate students. She currently has three graduate students in her lab. At UIC, she has mentored 17 Ph.D. students and 14 postdoctoral researchers, as well as several MD fellows, medical students, undergrads and high school students. She’s also a program leader for the Cancer Biology program in the UI Cancer Center.

Tyner’s work is far-reaching. She has published more than 80 papers in top peer-reviewed journals and has almost 7,000 citations.

“Dr. Tyner is an outstanding scientist of the highest caliber, and has achieved a high level of acclaim both nationally and internationally,” wrote Jack Kaplan, professor and head of biochemistry and molecular genetics, in his nominating letter. “Dr. Tyner’s contributions to epithelial cell signaling have led to national and international recognition.”

Her work has been externally funded since she joined the faculty.

“I trained with outstanding mentors and role models,” Tyner said.

She joined UIC in 1991 after completing a postdoctoral fellowship at Princeton University.

“I enjoy my work, interacting with my colleagues and students, and the rich cultural life available in Chicago, including Steppenwolf Theatre and the Chicago Symphony Orchestra with Maestro Muti,” she said.