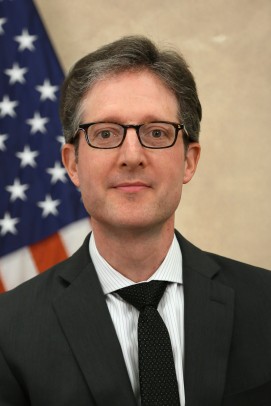 Paul Weinberger, director of federal relations for the University of Illinois System.

Paul Weinberger, a veteran congressional staffer with two decades of experience on Capitol Hill and with federal agencies, has been named director of federal relations for the University of Illinois System.

Weinberger will lead Office of Governmental Relations operations in Washington, D.C., advocating for research funding and legislation that supports students and academic programs at the U of I System’s universities in Chicago, Springfield and Urbana-Champaign.

He began his new role in a designate capacity April 5, pending formal approval by the Board of Trustees at its May 11 meeting in Springfield.

“Paul has played key roles in directing legislative agendas and advocating for government agencies on Capitol Hill,” Killeen said. “His first-hand experience with legislators and the congressional process will serve the U of I System well.”

From 2013 to 2017, Weinberger was vice president for congressional and public affairs at the Millennium Challenge Corporation, overseeing communications and outreach strategies for an independent U.S. foreign aid agency created by Congress to help lead the fight against global poverty. Before working there, he served for two years as director of congressional relations for the U.S. Peace Corps, developing and implementing the legislative agenda to support the agency’s social and economic development efforts around the world.

Earlier, Weinberger served for eight years as legislative director for U.S. Sen. Russ Feingold (D-Wis.), who was a member of the Senate’s Budget, Judiciary and Foreign Relations Committees.

An attorney, Weinberger also served as counsel for the House Committee on Government Reform and as a staff member for the Senate Committee on Appropriations.

Weinberger, 46, earned his bachelor’s degree in history from Yale College and his law degree from the Harvard School of Law.

He succeeds Jonathan Pyatt, who resigned in 2015 to become chief of staff for U.S. Rep. Cheri Bustos (D-Ill.). Melissa Haas, who was acting director during the interim and is based in Chicago, was promoted to associate director of federal relations and will work with Weinberger to lead the U of I System’s federal advocacy efforts.

“I am grateful to Melissa for her leadership over the past two years,” said Lindsay Anderson, executive director of the Office of Governmental Relations. “With their combined experience and knowledge of the U of I System, she and Paul will make an excellent team.”

The office serves as a liaison to state and federal legislators and agencies, local officials and key higher education associations. Jennifer Creasey, director of state relations, advocates for the U of I System in the Illinois General Assembly.