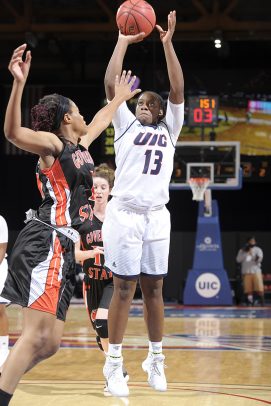 The women’s basketball team is off to a great start for their regular season opener this week after winning its exhibition match Nov. 2.

The Flames start the season Friday by host Bethel at noon at the Pavilion.

During the exhibition game, UIC jumped out to a big early lead and never looked back, topping Governors State, 82-36, at the UIC Pavilion.

Brittany Byrd led the team with 15 points and eight rebounds. Teodora Zagorac had 13 points on 5-for-5 shooting and Tylah Lampley added 12.

UIC started the game on an 18-4 run, making 8 of 12 field goals. By the time Byrd made her second three-pointer with 5:09 to go, the Flames had a lead they never relinquished.

Late in the first half, Lampley grabbed an offensive rebound and made the shot to push the score to 24-8. Then Jada Nneji made a steal and dropped a nice pass to Lampley for another easy bucket.

Governors State scored the first four points of the second quarter. The Flames pressed on an inbound play and Nneji deflected the ball to Kiarra Thompson, whose layup stopped the modest run.

Kara Wilson scored her first basket after she and Taylor Toney applied defensive pressure to force a turnover, then ran a two-person fast break to perfection, making the score 36-12.

Midway through the third period, the Jaguars put together a 6-0 run. The Flames squashed it with effort on both ends. After a free throw, they forced a shot clock violation, then Zagorac dished to Gabryelle Johnson for an easy layup. Johnson followed with a steal, leading to a three pointer by Tia Tedford.

The Flames’ freshmen put an imprint on the final stages of the third quarter. Abreanna Lake found Nneji, who made a drop step layup. Nneji then blocked a shot, and Lake contributed a rebound.

Deja Anderson-Fitzell entered in the fourth quarter. She blocked a shot and was rewarded with a layup on the ensuing possession.

Zagorac needed just six minutes to reach double figures. She made all five of her shots and three of four free throws to finish with 13 points.

Nneji had five of the team’s 18 steals, part of 30 Jaguar turnovers that led to 29 Flames points.