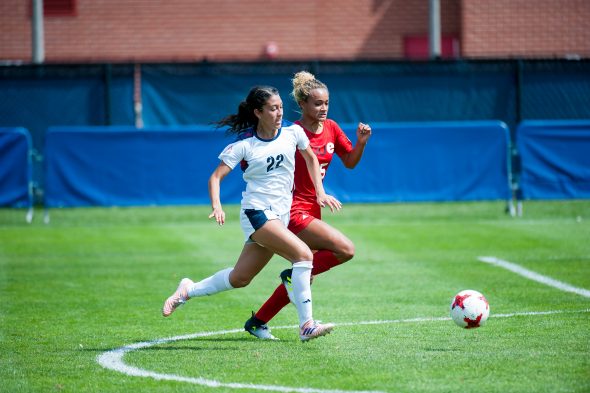 The women’s soccer team used home field advantage to claim a 2-0 shutout victory Saturday over Cleveland State at Flames Field for its first Horizon League win. Rebeca Pallo and Madison Pollard scored for the Flames and Annie DiCanio picked up the clean sheet.

UIC (3-10-0, 1-3-0 HL)  was barely outshot on the night, 16-14, as it tallied six attempts on goal. Olivia Everin took a game-high four shots and put three of them on goal, while Pallo followed with three attempts.

For the second-straight game, DiCanio earned the start and made four saves. She tallied her third shutout of the season and improved her goals-against-average to 1.17.

During the first half of play, the Flames controlled a majority of the possession and attempted four shots while the Vikings put up seven, with DiCanio needing to make just one save.

In the 58th minute, Békah Allen picked up the ball and passed it off to Pallo, who shot it from 20 yards out and into the back of the goal for the 1-0 lead and her second goal of the season.

The Flames went ahead, 2-0, just 11 minutes later in the 69th minute when Everin took a free kick and connected with the head of Pollard for her first goal of the year.

The Flames are back in action tonight, with a 7 p.m. match at Illinois State. They head to Detroit to take on Detroit Mercy at 3 p.m. Saturday.