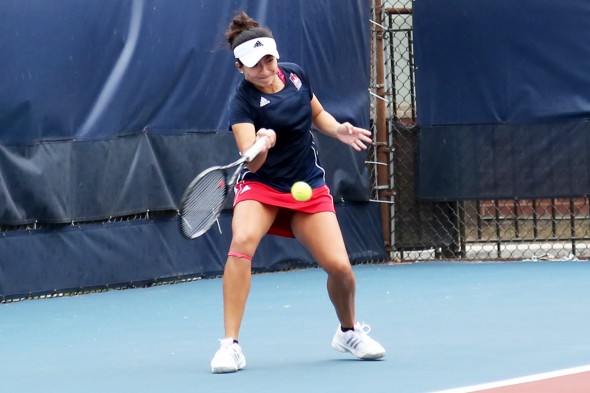 The women’s tennis team capped its stint at Northwestern’s Wildcat Invite Sunday afternoon after three days of competition. The Flames collected 10 victories during the tournament, with five each in doubles and singles.

Miranda Rodriguez Diaz de Leon achieved five of the victories with two in singles and three in doubles while paired with Oana Manole.

Rachel Le Comber, Bianca Zuzu and Stefana Vasic added to the total in singles, with Le Comber, Vasic, Melika LeBlanc and Georgie Sanders picking up the remaining wins in doubles.

UIC went without a win during the first day of doubles before coming back on day two. Rodriguez Diaz de Leon and Manole held their own, defeating a combo from Iowa and Pittsburgh, 6-3, then taking down Wisconsin, 6-1. Positioned in the championship of the consolation bracket, the Flames duo ousted Eastern Michigan, 6-1, for the title.

The Flames had two more doubles wins. Le Comber and Vasic claimed a 6-4 victory over Wisconsin, and LeBlanc and Sanders took hold of a hard-fought 7-5 final against Notre Dame.

The lone win in singles during Friday’s competition came for Rodriguez Diaz de Leon, as she captured a straight-set 6-1, 6-4 win over Pittsburgh. UIC did not compete in singles Saturday.

On the final day of action Sunday, the Flames took four singles wins. Rodriguez Diaz de Leon won her second match of the weekend in a 6-3, 6-2 decision against Northwestern. Le Comber bested Pittsburgh, 6-4, 6-2, in straight sets.

UIC will take a break from competition to prepare for the USTA/ITA Midwest Regionals Oct. 20-24 at Michigan State.