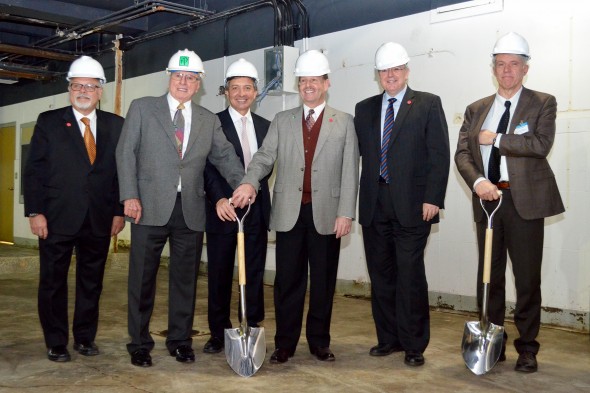 Located in the Neuropsychiatric Institute, the new 15,000-square-foot Surgical & Interventional Training Center will allow for the simultaneous training of as many as 13 trainees, up from two trainees, who can use the equipment at the Pasquinelli Surgical Training Laboratory, the existing robotic surgery training center.

At just 840 square feet, the Pasquinelli Lab presents somewhat of a bottleneck for residents who want to use the equipment, explained Pier Giulianotti, Lloyd M. Nyhus, MD Chair in General Surgery and professor and chief of general, minimally invasive and robotic surgery at UIC.

“The Pasquinelli Lab is becoming too small for the rapidly growing number of physicians and residents interested in training in robotic surgery,” he said. The facility also will offer an opportunity to all surgical specialties, in particular neurosurgery, to practice and receive advanced training.

The new lab will support multiple training stations that include the same robotic surgery equipment used in the operating room. Each station will also have viewing monitors so others can observe trainees.

The new training center will have direct connections to classrooms and the operating rooms at the University of Illinois Hospital, a private auditorium, direct access to animal and cadaveric specimens and a simulated operating room.

The new training center is funded through a variety of sources, including a generous gift from the Bruno and Sallie Pasquinelli family.

Construction will move forward pending approval by the University of Illinois Board of Trustees.