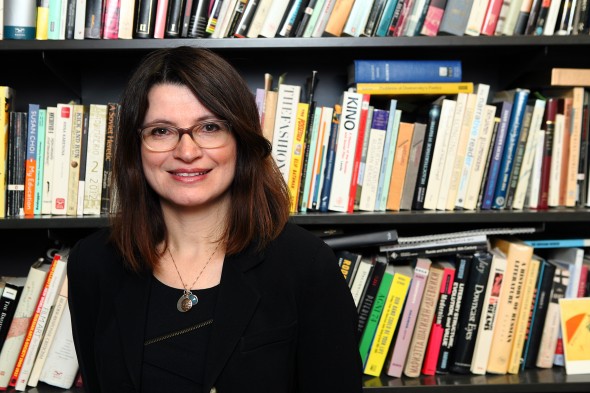 “If we have an involved, engaging argument that means something vital has occurred there,” says Julia Vaingurt. (Photo: Jenny Fontaine)

“When I come to the classroom, I’m quite psyched about the material I’m going talk about,” said Julia Vaingurt, associate professor of Slavic and Baltic languages and literatures.

She’s equally enthusiastic about hearing the students’ opinions on the subject matter, be that Russian literary classics or European and Russian modernism.

“That also shows them that this in an environment where we are all going to learn something exciting,” Vaingurt said.

Students sometimes get aggravated by the absence of clear-cut solutions offered by literary texts. She believes an orientation toward exploring the questions provoked by their material, rather than focusing on the search for answers, is a valuable exercise.

“If we have an involved, engaging argument that means something vital has occurred there,” she said.

Her teaching and research also focuses on the Russian avant-garde, an artistic movement that sought to “shock people out of complacency” by experimenting with various forms and creating works that could have been perceived as strange.

“The avant-garde artists aimed at creating a revolution in thinking through art,” she said. “Their belief was that an encounter with strangeness would jolt their audiences out of the rut of conventional thinking.”

Vaingurt wants her courses to have a similar effect on students.

“It is essential to me that in my courses students acquire vital professional skills,” she said. “But, in my view, good liberal arts and sciences education should give students more than just vocational training. It should expand your worldview, engage you in critical and ethical reasoning. It allows you to discover and acquire new intellectual interests and pursuits, and ultimately enhance your well-being.”

At UIC since 2005, Vaingurt appreciates the interest that students have in other cultures.

“This is a wonderful symbiosis for me because students are open to learning,” she said. “They are capable of approaching another culture with empathy, sensitivity and curiosity.”