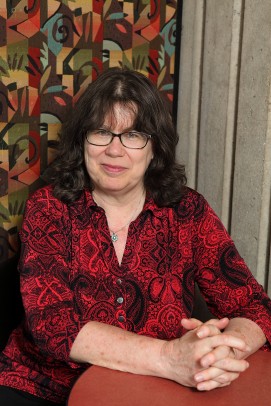 “I want to be clear we’re working on this together, but let’s try to work at the top of our intelligence,” says Marla Weeg. (Photo: Jenny Fontaine)

Marla Weeg, a conservatory-trained actress, transitioned to studying literature and fiction writing in the late 1990s after nearly two decades of improv and drama in Chicago.

“Coming from the improv and acting world, it felt like I had a degree in welding,” she said of the shift to academia.

Weeg earned a master’s in education at DePaul and a master’s and Ph.D. in English at UIC, where she’s been a lecturer since 2006. She admits returning to school and learning a whole new skill set was intimidating at times, so she aims to remember how she first felt at UIC and be very approachable for her students.

“I want to be clear we’re working on this together, but let’s try to work at the top of our intelligence,” she said. “That’s basically the method of Paul Sills, who started Second City.”

The latter is an example of how Weeg, whose courses cover composition and American and English literature, has a classroom style that is heavily influenced by her theater background.

“When I get frightened of using improvisation, I lose and the student loses,” she said. “Anytime I use some sort of theater game, even a warmup exercise like throwing an imaginary ball or who started the motion, in just two to three minutes it equalizes everybody and the students are more ready to learn.”

Fiction, poetry and drama are primary elements in her introductory literature courses.

“I have them write their own fiction and I pick the ones that I thought would work best in performance,” she said. “Those students then direct the others in sketches in class and they all have to do an analysis of the characters.”

Most importantly, the first-time Silver Circle award-winner appreciates learning from and about her students through their writing in her “Politics of Parenting” composition course.

“The student research papers on being an immigrant, being first generation, have opened a whole new world to me,” she said. “That really puts me in awe.”