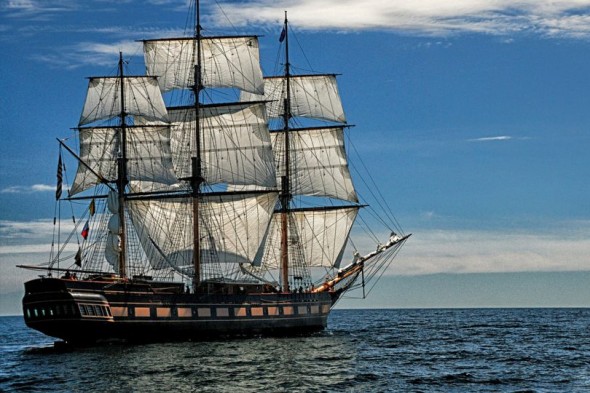 “It’s a great opportunity for any student, and it’s really one of the best ways to solidify what you’ve learned,” said the doctoral student in earth and environmental sciences.

Bellagamba has extensive field training in polar sciences, one of the reasons he’s been invited to embark on another adventure. This time, he’ll go north. 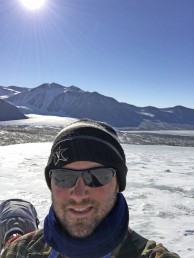 Bellagamba is a participant of the Northwest Passage Project (NPP), a program that will allow students, researchers, experts, and media professionals to see, first-hand, the changing environment of the Arctic, where the effects of climate change are amplified.

Thirty-five high school, undergraduate, and graduate students from collaborating institutions, a marine biologist, geochemist, physical oceanographer, historian, journalist and professional film crew will board the SSV Oliver Hazard Perry (OHP) this summer to conduct cutting edge research and visit several remote Inuit settlements. The OHP is a 200-foot tall ship that will sail the sea route that connects the Atlantic and Pacific oceans through the Canadian Arctic Archipelago waterway.

“This is unprecedented,” said Miquel Gonzalez-Meler, the UIC coordinator of the project.

“For years, the ice cover of the Arctic Ocean has made this understudied area difficult to access, but the earth’s rising temperatures have caused sea ice to melt,” Gonzalez-Meler explained. Now, the Northwest Passage is easier to navigate, and the OHP will be the first full-rigged sailing ship to enter the passage in more than a century.

“The students will be sailors, scientists, observers, and, at the same time, historians, archeologists, and social scientists,” said Gonzalez-Meler, who is professor of biological sciences and associate dean for student academic affairs in the College of Liberal Arts and Sciences. 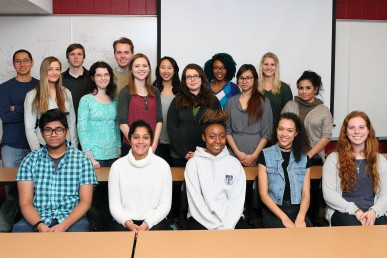 Eighteen undergraduates will participate in the Northwest Passage Project. Four will sail with the ship, and the rest will work in Chicago or Rhode Island. (Photo: Jenny Fontaine)

The expedition, led by researchers at the University of Rhode Island, will
allow participants to visit archaeological sites and disembark at other locations to study the molecular behavior of ice, take measurements, gather more scientific data, and interview elders from Inuit villages to understand the ways climate change has impacted and continues to impact their lives. The onboard film crew will follow participants and document their discoveries, producing a two-hour documentary called “Frozen Obsession.”

“This will be the first time undergraduate students from the United States will travel the Northwest Passage,”Gonzalez-Meler said.

That’s why Bellagamba’s role is so critical. Besides collecting data that will help researchers understand the geochemistry of the changing sea water there, he’ll also mentor undergraduate and high school students on the boat.

“We didn’t need someone who was just a scientist, who can turn off the instruments and run them — we needed someone who was going to be supporting the students’ experiences and their education,” said Max Berkelhammer, assistant professor of earth and environmental sciences, who will examine the atmospheric measurements collected by students. 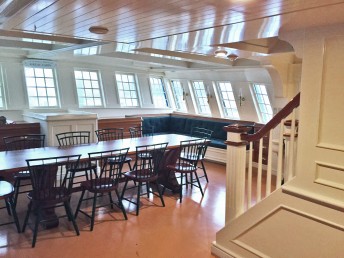 A meeting room inside the SSV Oliver Hazard Perry.

Bellagamba’s role as a mentor has already started. This semester, he sits in class with 18 undergraduates who are participating in the project.

He observes and facilitates discussions after Gonzalez-Meler and Berkelhammer cover relevant historical, anthropological, geological, and biological content. Science communication activities and information about sailing duties are shared too.

Only four undergraduates will sail with the ship, but seven will intern at the University of Rhode Island’s Inner Space Center (ISC) telepresence facility, helping produce 30 live broadcasts from the Arctic. The broadcasts will be streamed to the center via satellite and sent from the ISC to the Smithsonian Institution’s National Museum of Natural History, San Francisco’s Exploratorium, the Alaska SeaLife Center, and UIC.

Another UIC doctoral student, Margaret Malone, a marine biologist who studies the ecology of coral reef fish communities, will provide support from Rhode Island. The remaining seven undergraduates will participate in other shore-based activities on campus and in or around Chicago.

The experience will be invaluable to students, said Astrida Orle Tantillo, dean of the College of Liberal Arts and Sciences.

“The whole purpose of an undergraduate education is to broaden students’ horizons, and what could be more exciting than a project that’s so hands-on, that’s so historically significant, and that covers so many different bases?” she said. The LAS Undergraduate Research Initiative is providing $30,000 in support. 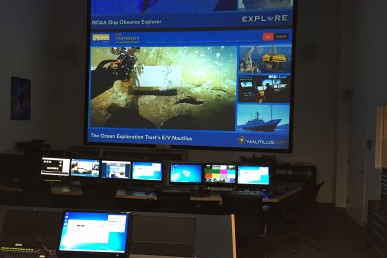 Some students will be stationed at the University of Rhode Island’s Inner Space Center.

The expedition and support services happening this summer are only the tip of the iceberg. A large part of the three-year project, funded by a $3 million grant from the National Science Foundation, will sit below the surface.

“Making the measurements is just the little tip that sticks out, and then there’s this year or two or three years of handling the data and writing papers about the data,” Berkelhammer said.

“We want to make sure, when [students] come home, they keep making connections in a complete different setting, like the city of Chicago,” Gonzalez-Meler added.