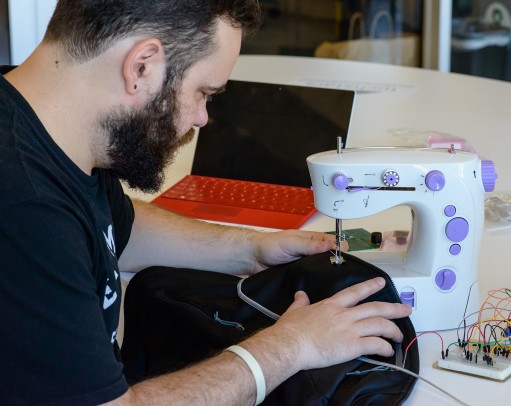 Victor Mateevitsi took first place for an image that shows him working on his innovative technology, SpiderSense.

For UIC graduate and professional students, the Image of Research competition presents the unique challenge of encapsulating years of research into one picture accompanied by a short text.

“It’s thinking about their research from an external level,” said Kevin Monahan, project coordinator of Image of Research and director of graduate program review and information systems. “Why should the public care about your work? That’s an important question a researcher can ask.” 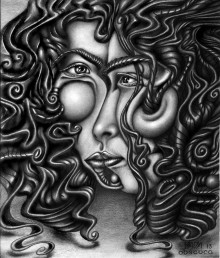 This year’s competition, cosponsored by the Graduate College and University Library, asked seven jurors to critique 104 entries based on originality, relationship between the image and student’s research and overall aesthetic appeal.

Exhibits showcasing the winners and finalists are now on display at Daley Library, Library of Health Sciences and on light pole banners around campus.

“I was really happy with the fact that we got some really strong images,” Monahan said.

Among them, first-place winner Victor Mateevitsi’s image that combines, yes, fabric and technology.

“It looks like I’m sewing something,” Mateevitsi said, laughing. “Then you have the electronics, so you may start thinking, ‘What’s going on?’” 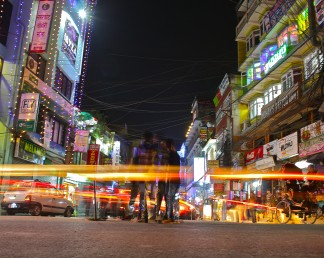 What’s going on is Mateevitsi working on his innovative technology, SpiderSense. The invention focuses on enhancing the quality of human life by using vibration to communicate messages — otherwise known as haptics. Its applied science can assist the blind and save the lives of first responders.

Although SpiderSense has already been featured in high-profile events like the Discovery Channel’s “All-
American Makers,” Image of Research is important to Mateevitsi because it forces him to take a new approach when explaining his technology.

“As scientists, a lot of times we’re really focused on our research and on getting our papers published,” Mateevitsi said.

“We’re not really good at [public relations] and talking in a language the general public can understand. With the Image of Research, you get an opportunity to have your picture on the campus where people can see it, ask questions and learn about what’s going on.” 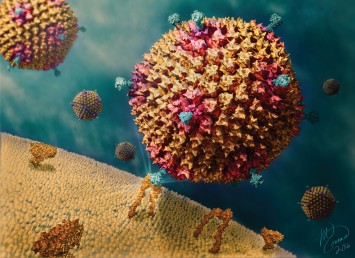 For the first time in the nine-year existence of Image of Research, the second-place winner went to a student from the English department. Cecilia Villarruel, who writes about alternative ways to analyze drug addiction, received the honor.

“There’s a lot of stigma and shame when it comes to addiction,” Villarruel said. “It’s not just the addict, but people who love an addict.”

Villarruel’s image is a distorted portrait of herself drawn by her boyfriend Paul, who goes by DADA obscura in the art world. Paul has struggled with heroin addiction for decades and is often the main impetus behind Villarruel’s writing. She named the image “Aberrations.”

“In optics an aberration is when the lens isn’t clear or something isn’t focused,” Villarruel said. “I feel like we often have lenses that can be more clear, so we can see things in a different way and not with our assumptions.”

Villarruel hopes that her second-place finish will inspire more people from humanities to enter their work in the Image of Research competition.

“I feel like I broke a little barrier,” she said. “I’m hoping more people in the English and creative writing department will think about submitting.”