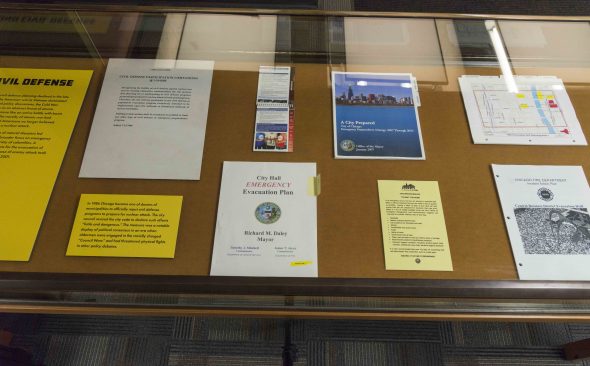 A new UIC Library exhibit, “Chicago Alert! The City Plans for Atomic Attack,” features documents, maps, photographs and memorabilia from several of the Library’s special collections illustrating how views on and plans for civil defense preparedness evolved over time among city officials and various Chicago area organizations and institutions, including UIC.

As part of Open Archives Chicago, David Greenstein, exhibit curator and Special Collections and University Archives lecturer, will host a special tour and presentation about the exhibit from 3 to 4:30 p.m. Oct. 10 at the Richard J. Daley Library, Special Collections and University Archives, Third Floor. Participants will have an opportunity to view additional materials that are not on display. Registration is required.

Spurred by fear of the Cold War and rooted in the American values of individualism, consumerism, volunteerism and free-market capitalism, civil defense campaigns during the 1950s were meant to both scare and reassure citizens. They sought to inspire people to participate in their own defense by building private family fallout shelters while avoiding panic and limiting the expectation that the federal government should — or could — provide protection from an atomic attack. In large cities like Chicago, however, most people did not have the space or money to build their own shelters, and civil defense programs shifted to a focus on mass evacuation.

As atomic weapons grew more powerful, surviving a direct hit seemed unlikely and planners saw the spread of radioactive particle fallout far from the blast area as the main threat. During the Berlin Crisis in 1961 and the Cuban Missile Crisis in 1962 there was renewed focus on civil defense shelters.

On view in the “Chicago Alert!” exhibit are several items that were used in a Circle Campus experiment conducted in collaboration with defense contractors to study the effects of confinement in a fallout shelter. Four hundred faculty, students and neighborhood recruits were confined in a converted campus building along with psychology department observers.

As the idea that no one would survive a nuclear attack became more widely adopted, social justice organizations called for financial resources for nuclear attack preparedness to instead be invested in programs that could provide more practical assistance to citizens. In 1986, Chicago revised the city code to officially reject programming to prepare for nuclear attack. After September 11, 2001, a renewed interest in emergency preparedness can be seen in materials from the Richard M. Daley papers.