Obesity causes rheumatoid arthritis to develop earlier, and may play a significant role in delaying the effect of drugs commonly prescribed to treat the disease, researchers report in the journal Annals of the Rheumatic Diseases.

Rheumatoid arthritis is a chronic autoimmune disorder in which immune cells move into the joints, causing inflammation and, eventually, bone erosion. Studies suggest that obesity is a significant risk factor, and obesity has been linked to worse disease progression and worse response to anti rheumatoid arthritis drugs. 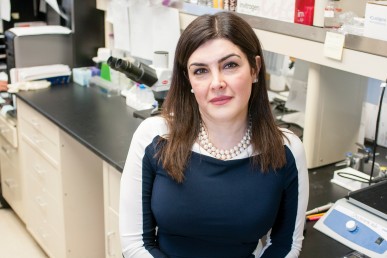 Researchers in the University of Illinois at Chicago College of Medicine describe the differences in pathology of rheumatoid arthritis in obese mice compared to normal-weight mice, using both a chronic and an acute model of the disease.

“Onset was about two days earlier in obese mice compared to normal-weight mice after induction of arthritis,” said Shahrara, who is corresponding author on the paper.

When she looked at fat extracted from the ankle joints of the mice, she found that obese mice had about twice the amount of a pro-inflammatory factor called MIP2 than normal-weight mice. MIP2 attracts cells called neutrophils to the joint, which are known to be the first immune cells to migrate into the joints during the onset of rheumatoid arthritis. She found the same elevated levels of the human version, called IL8, in fat tissue taken from the joints of patients with rheumatoid arthritis who had undergone orthopedic procedures.

While the onset of rheumatoid arthritis was earlier in obese mice, after about seven days the disease looked the same in both types of mouse.

“Once the neutrophil phase passed and the disease set in, it looked the same in terms of joints swelling in the obese and normal-weight mice,” Shahrara said.

Next, the researchers switched to an acute mouse model, in which the time between onset and resolution of rheumatoid arthritis  is only about 72 hours. They found that joint swelling went down more quickly in normal-weight mice compared to obese mice.

When they looked at tissue extracted from the joints, they found higher levels of macrophages, a type of immune cell associated with established rheumatoid arthritis, in the obese mice than in normal-weight mice. Macrophage levels also came down much slower in obese mice as the disease progressed through the resolution phase.

The higher level of macrophages in the joints of the obese mice hint as to why anti-TNF-alpha antibody, one of the most commonly prescribed drugs to treat rheumatoid arthritis, works much more slowly in obese people compared to thinner people, Shahrara said.

“I see this all the time in the clinic — my heavier patients take a lot longer to get relief from the medications we prescribe,” she said. “If obese patients have more macrophages in their joints to begin with, like we saw in our mice in this study, it would make sense that anti-TNF-alpha antibody takes longer to work, since it works by reducing the numbers of macrophages in the joints.”

Shahrara believes that obesity sustains rheumatoid arthritis — prolonging its duration and making it resistant to drug treatment — by up-regulating production of a molecule that binds to TLR4. When the molecule binds to TLR4 in the joint, it induces the transformation of immune cells in the joint into proimflammatory macrophages — the cells responsible for sustaining the disease.

“Since we saw that the TLR4-binding molecule is found in higher levels in the adipose tissue of obese mice, then if fat is a kind of reservoir for this molecule, then that could be the mechanism by which fat causes rheumatoid arthritis to be more resistant to drug treatment in heavier people,” Shahrara said.

This work was supported in part by awards from Department of Veteran’s Affairs MERIT Award 1I01BX002286; National Institutes of Health awards AR055240 and AR065778; a grant from Within Our Reach from The American College of Rheumatology; Department of Defense award PR093477; and an Arthritis Foundation Innovative award.