More than half of adults with sickle cell will develop chronic kidney disease, making it one of the most common and severe complications experienced by sickle cell patients.

Identifying those sickle cell patients at greatest risk can help physicians develop proactive, individualized strategies to reduce the high rate of early mortality due to kidney disease, says Dr. Santosh Saraf, assistant professor of hematology and oncology in the University of Illinois at Chicago College of Medicine. 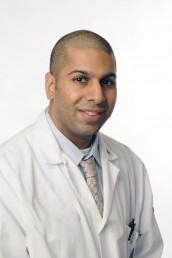 Dr. Santosh Saraf, assistant professor of hematology and oncology in the University of Illinois at Chicago College of Medicine and physician at UI Health.

A study by Saraf and a team of researchers at UIC shows that a risk profile that combines three specific genetic markers—the APOL1, alpha-thalassemia and BCL11A gene variants—can help physicians categorize patients as high- or low-risk. The study is published in the journal Haematologica.

“We looked at the genetic factors already known to be associated with kidney disease or the degree of red blood cell hemolysis and examined the relationship they had with the condition in sickle cell patients,” said Saraf. “Our hypothesis was that a genetic risk profile that integrated APOL1, alpha-thalassemia and BCL11A would improve our ability to predict a patient’s risk for developing chronic kidney disease.”

The researchers recruited 262 adult patients from the UI Health Sickle Cell Center between 2010 and 2016. They collected patient data, drew blood, analyzed the genetic markers in blood—a process called genotyping—and prospectively followed the patients to see which ones would develop kidney disease.

The researchers found that one particular genetic profile put sickle cell patients at higher risk for the two key indicators of kidney disease.

One of the genetic markers—the BCL11A variant—is the target of ongoing gene therapy studies for red blood cell disorders, such as anemia. This is the first to look at the BCL11A variant in predicting risk for kidney disease.

“The results of this study are encouraging,” said Saraf. “By understanding more about the genetic risk factors of kidney disease in sickle cell patients, we are one step closer to improving the length and quality of life for the millions of people worldwide living with sickle cell disease.”

Sickle cell disease is the most common monogenetic blood disorder in the U.S. and occurs in approximately one out every 365 births for those of African descent.

“Using combinations of genes to better predict complications in sickle cell anemia is a new approach,” said Dr. Victor Gordeuk, director of the sickle cell program at UIC, the corresponding author on the paper. “The results of this study indicate that it is effective and probably can be improved on in the future to be an important part of our evaluation of patients.”

The researchers say the small sample size and observational nature of the study are limitations, and they hope to validate the results with larger additional studies.