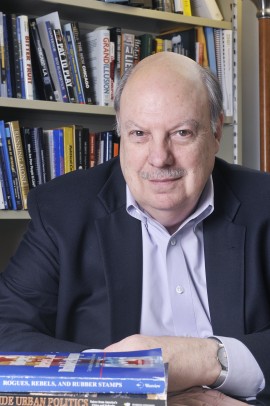 “No matter how you slice it, 2015 was a bad year for public corruption in our state,” says report co-author Dick Simpson, professor of political science.

The tradition of corruption in Illinois remained strong last year according to a new report published by UIC researchers.

The report, “2015 a Banner Year for Corruption in Illinois, Anti-Corruption Report #9,” catalogues 27 convictions, 28 indictments, the launch of 11 corruption investigations, and the sentencing of 30 convicted elected officials, government employees, and private sector individuals from the Land of Lincoln.

“No matter how you slice it, 2015 was a bad year for public corruption in our state,” says report co-author Dick Simpson, professor of political science.

Highlights of the report include:

• the arrest and guilty plea by former Congressman Dennis Hastert;

• the indictment of a Chicago Police officer for the shooting murder of an unarmed teenager;

• the resignation of Congressman Aaron Schock, a Republican from Peoria, for alleged misuse of campaign funds;

• the conviction of Karen Finley, CEO of Redflex Traffic Systems Inc., who pleaded guilty to funneling cash to a Chicago official in order to be awarded the city’s red light camera contracts.

A majority of the convictions and other legal actions documented in the report are the work of the U.S. Attorney for the Northern District of Illinois, which includes Chicago and Cook County and the northern third of the state.

Many of the convictions were carried out by the U.S. Attorneys from the Central and Southern Districts of Illinois. The researchers also documented six public corruption cases handled in 2015 by the Cook County State’s Attorney.

According to the report, public opinion polls show that only 25 percent of Illinois residents trust their state government, the lowest level of trust of any state.

“This loss of faith in government is not only caused by the budget stalemate in Springfield and lowered bond ratings in Chicago but also by the astounding level of corruption from city hall to the state house to even doctor’s offices,” Simpson said.

The report offers suggestions for reform, such as public funding of political campaigns; a fair remap of all legislative districts; increased citizen participation in elections and government; strengthening inspector generals and creating a suburban inspector general; fundamental changes in the Chicago Police Department; preventing public officials from representing private individuals and corporations for profit before other units of government, and making public information available in more useable forms on the internet in a structured, open and searchable manner.