Could an app help HIV-positive patients stick to their drug regimen?

Can an interactive human avatar teach patients to take their medication as prescribed and keep their healthcare appointments?

A researcher at the University of Illinois at Chicago School of Public Health and his collaborator will begin testing an app this fall that they think will do just that. Their personal-technology approach to medication adherence and retention, aimed first at young African-American HIV-positive males who have sex with men, could be expanded to help other patient populations stick to their treatment plans, if it is proven effective.

Dr. Mark Dworkin, professor of epidemiology and biostatistics at UIC, and Sangyoon James Lee, assistant professor of computer science at Connecticut College, will present their app Oct. 28 at the IDWeek conference in New Orleans. 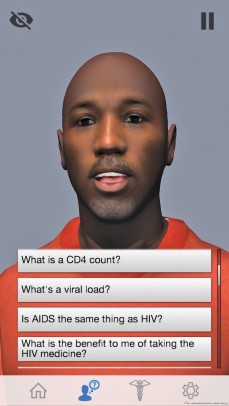 A screen shot from the app. Credit: Dr. Mark Dworkin.

“We’re breaking new ground by embedding a relational, talking avatar into a smartphone app for the purpose of informing and motivating healthy behavior,” Dworkin said.

An estimated 1.2 million people are living with HIV infection in the U.S. According to the Centers for Disease Control and Prevention, African Americans are disproportionately affected by HIV. In 2014, an estimated 44 percent of new HIV diagnoses were among African Americans, who make up only 12 percent of the U.S. population. Three-quarters of the newly diagnosed blacks were male.

Taking antiviral medications as prescribed significantly reduces the risk of the disease progressing to AIDS and also reduces the risk of transmitting the infection to others. Studies have found that young African-American males who have sex with men particularly struggle with medication adherence and keeping their health appointments.

Dworkin and Lee, who is co-principal investigator and a UIC alumnus, have spent the past year developing and refining their avatar-based app.

The avatar, which appears as the head and shoulders of an adult African-American male, has two major functions: to answer questions about HIV and medication adherence, and to support behaviors that contribute to taking medication on time, every time. Users can customize the appearance of the avatar and background.

The avatar empathetically acknowledges the stigma faced by many HIV-positive black men, especially those who have sex with men, which can be a major barrier to seeking testing and treatment, Dworkin said.

Dworkin convened five focus groups to ensure the app was culturally sensitive before each of its functions was revealed and then beta tested. The focus groups also helped the researchers develop the communication style for the avatar, which speaks in plain language and conveys empathy and acknowledgement of the stigma these young men experience, Dworkin said.

“We took out phrases and language the groups told us turned them off, such as how and when the term ‘AIDS’ was used in explanations,” Dworkin said. “Based on the groups, we also have the avatar acknowledge the fears they may have around needing to take medications for the rest of their lives and developed sensitive but motivational responses for the avatar to help them stick to their treatment plans.

“It was especially exciting when we presented the avatar back to them in later focus groups, and the men said they liked it and wanted to download it.”

Stigma, as well as low literacy, can limit the uptake of information and lead to less healthy behavior.

Users can create reminders to take medicine or attend appointments; track their medication adherence and test results; and note any side effects.  Information entered into the app can be graphically displayed to the user or the healthcare provider, who might use it to advise the patient or plan treatment.

Co-investigators include Dima Qato and Colleen Monahan of UIC, Dr. Robert Garofalo of the Ann and Robert Lurie Children’s Hospital of Chicago, and Dr. Lisa Hightow-Weidman of the University of North Carolina School of Medicine. This research was funded by the NIH National Institute for Nursing Research grant NR 016420-01.