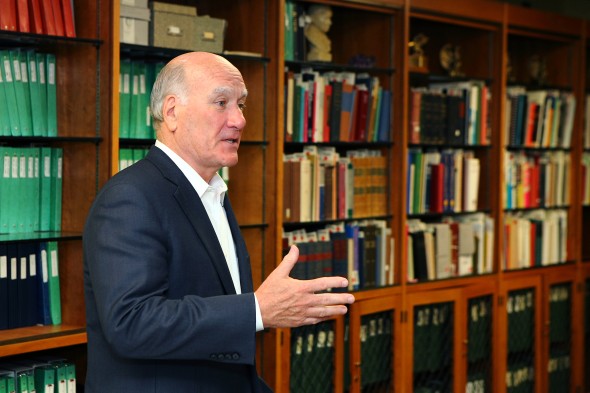 After studying hundreds of documents from the UIC Library’s Richard J. Daley Collection for nearly two months, students from the Honors College welcomed William Daley, the longtime Chicago mayor’s son, to campus April 7 with pressing questions about his father, the collection, and the nation’s ongoing political climate.

“We’re looking at some of the challenges that the city faced: the changing migration of the city, suburbanization and urban redevelopment [in 1968],” David Greenstein, visiting lecturer for Special Collections and University Archives, said about the class, the first of several that will use the collection to explore the late mayor’s legacy. “We’re also looking at some of the ways that those local issues were connected to national and international politics…and we’re using archival collections here to explore those issues.”

Daley began his informal lecture with an overview of the ’60s.

“I’ve always believed it was one of the most tumultuous periods in the nation’s history,” said Daley, a former commerce secretary in President Bill Clinton’s administration and White House chief of staff for President Barack Obama.

Daley then addressed some of the biggest historical events of that period, including John F. Kennedy’s election, the wave of youth activism and engagement that followed, the “battles” around politics and boundaries of self-control in Chicago, and the beginnings of civil rights movements.

“For my dad’s generation, there was an instant clash that was coming, as replicated in many other ways around the nation,” he said, explaining that cultural and social shifts, characterized in large part by an increasing amount of protests around the war in Vietnam and a push for equality on all fronts, created conflicts among political leaders and between politicians and their constituents.

“Much of the democratic constituency was demanding more change,” Daley said. “The other side was saying, ‘Too much change.’ So, for people who were in leadership at the time, it made for a very difficult experience.”

He remembered the last time federal troops were used in Chicago — when urban riots broke out after Martin Luther King Jr.’s assassination — and touched on the effects of Kennedy’s assassination on the nation before covering other impactful events that happened around the world: massive youth riots in Paris; the 1968 Republican National Convention in Miami, where six people were killed; and the Soviet Union’s invasion of Czechoslovakia.

“That all rolls to Chicago in ’68,” he said, explaining that civil unrest led to chaos at the Democratic Convention. After people were denied permits to protest, riots broke out and Daley’s father, the Chicago Police and the National Guard pushed back, resulting in violent encounters between police and the public.

“Activism with a certain aggressiveness is what moves the system in many ways,” he said, advocating for peaceful protest. “Many people would say that’s been lacking in this country for a very long time since the ’60s, but there’s a line.”

In regard to the political and cultural problems and inequalities that people face today, Daley said people shouldn’t underestimate the challenges of diversity.

“There is no country in the world that is trying to do or is doing what we are doing with the diversity we have,” he said.

He ended with a statement about his father’s impact on Chicago.

“I’m very proud of my dad and his tenure,” he said. “Was he perfect? No. Do I think he changed, fundamentally, this city over his 21 years in a positive way? Yeah, I do. Everybody builds on that or takes away from that — it’s a progression. I think the city of Chicago is stronger than it was when he came in.”

“Students had a real discussion with him,” Greenstein said afterward. “It was an exciting opportunity for students to interact with an important public figure in a small group.”