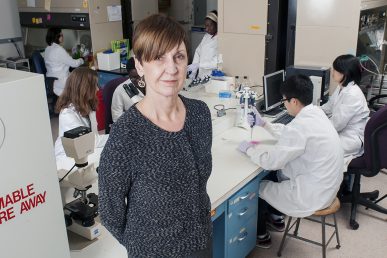 Judy Bolton, 56, distinguished professor and head of medicinal chemistry and pharmacognosy at the University of Illinois at Chicago College of Pharmacy, died March 5.

“Judy was a beloved friend and colleague whose impact as a researcher, educator and mentor will never be forgotten,” said Dr. Glen Schumock, dean of the UIC College of Pharmacy. “She will live forever in our hearts.”

Bolton, who passed away due to complications from breast cancer, joined the university faculty in 1994 as an assistant professor. She was appointed head of the department of medicinal chemistry and pharmacognosy in 2005; in this role, she guided the department through a period of tremendous growth and success. She was named a UIC Distinguished Professor in 2017.

“Judy was extremely dedicated to her work, and devoted to her scientific family, and to the UIC College of Pharmacy,” Schumock said. “She very much enjoyed her role as department head. Judy’s unequivocal support and mentorship of the faculty, students, postdoctoral researchers and staff was one of the many attributes for which Judy was beloved.”

A highly respected scientist, Bolton’s widely published work focused on understanding why women who take hormone replacement therapy or selective estrogen receptor modulators (SERMs) drugs are at increased risk for developing hormone-dependent cancers, such as breast or endometrial cancers. By understanding these mechanisms, she hoped to develop alternative drugs, and she was an active researcher in the UIC/National Institutes of Health Center for Botanical Dietary Supplements Research.

Bolton was named UIC Woman of the Year in 2013, and her most recent award was a Founder’s Award from the American Chemical Society.

In lieu of flowers, Bolton’s family has requested donations be made to an endowment established before her death. Contributions can be made in Bolton’s honor by indicating “UIC COP Professor Judy L. Bolton Medicinal Chemistry and Pharmacognosy Endowed Fund” in the bottom field, labeled “other.”