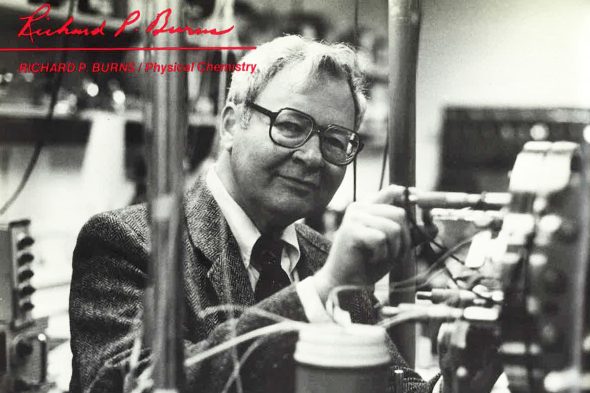 He spent his entire professional career at UIC, where he arrived in 1965 and retired in 2012.

Early in his career, Burns developed and taught basic laboratory courses in analytical chemistry, as well as instructed physical and general chemistry courses. He was involved in the recruiting and selection of personnel for the support shops that service the research and teaching needs of the department, namely in machining, instrument building, electrical and glass blowing.

He and his research students used mass spectrometric techniques to determine the character and amounts of species removed from surfaces in Thermal Desorption Spectra, in which the desorption rate from a surface is measured as a function of surface temperature.

“Dick Burns was a consummate experimentalist,” said Tim Keiderling, professor emeritus of chemistry. “He knew instrumentation and measurement methods better than most while always maintaining high standards for practical applications in science.”

His advice on remodeling, lab renovation, and instrumentation maintenance and purchases was always eagerly sought by other faculty and staff, according to Keiderling.

Burns was a key resource for design and oversight during construction of the then new (1970) Science and Engineering South building that housed research labs for chemistry, biology, physics and geology departments.

As associate head of chemistry from 2006 until his retirement, Burns coordinated undergraduate affairs and the staffing and management of the general chemistry course offerings.

“Throughout his long career, Professor Burns cared very much about his students and was a strong supporter of chemical education,” said Robert Gordon, professor emeritus of chemistry.

Prior to joining UIC, he earned a Ph.D. in chemical physics from the University of Chicago, where he worked in the laboratory of noted physicist Mark Inghram, a National Academy of Sciences member and pioneer in the development of mass spectroscopy and applications to geologically important materials.

Burns produced more than 15 papers as a student resulting from his thesis work, which primarily focused on characterizing metal oxides with thermal and mass spectrometric methods.

He received a bachelor’s degree in chemistry at Oklahoma Baptist University.

Burns, a longtime resident of Chicago’s Hyde Park-Kenwood area, is survived by his wife, Dora Jeanette Burns, and two sons, Jonathon and Steven.

A memorial will be announced by the department of chemistry.