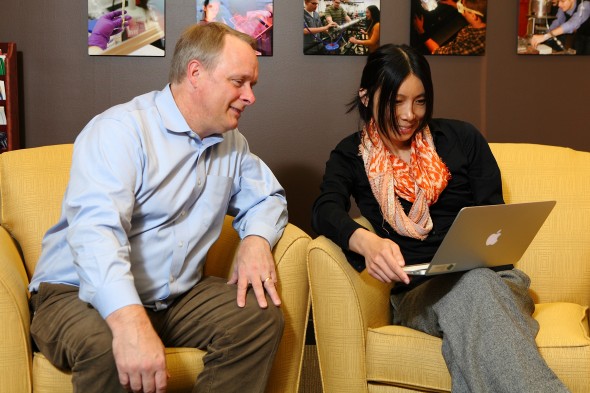 A cellphone app that measures typing speed and spell-check overrides may be able to predict manic and depressive moods in people diagnosed with bipolar disorder.

A team led by two UIC researchers has been chosen as one of two finalists in a contest to use Apple’s ResearchKit, an open-source platform for creating apps, to develop a means to study mood disorders. As finalists, they will receive $100,000 to develop their app using Apple’s beta-testing platform, Test Flight. The eventual winner of the Mood Challenge, to be announced in May, will receive a final award of $200,000 to launch their app publicly.

Alex Leow, associate professor of psychiatry and bioengineering in the College of Medicine, and Peter Nelson, professor of computer science and dean of the College of Engineering, led a team that developed an app called BiAffect that unobtrusively monitors mobile device usage — including keyboard dynamics such as typing speed.

Earlier this year, Leow and her colleagues completed a pilot study of 30 participants that showed typing speed, frequency of texting, and use of social media correlated to depressive and manic episodes in people with bipolar disorder.

“During a manic episode, people with bipolar disorder exhibit some common behaviors, such as talking really, really fast,” Leow said. “It is thus natural that they also type on their phones very fast and tend to not check what they are typing.”

Spell-check usage may be a strong indicator of a manic episode, she said.

“Spell-checking requires the writer to pause and determine whether or not to ignore the suggested correction, or keep typing. People in the midst of a manic
episode have reduced impulse control, and they tend to blow through the
spell-check alerts.”

Episodes of depression can also be identified by tracking cellphone usage, Leow said. During depressive episodes, typing a long message may become laborious, and messages tend to be shorter.

Bipolar disorder, which causes extreme mood swings between the emotional highs of manic episodes and low periods of depression, affects approximately 5.7 million adult Americans, or about 2.6 percent of those over 18, according to the National Institute of Mental Health. Diagnosis relies on careful history-taking and examination.

Leow thinks that apps like BiAffect may prove useful in other fields of medicine. For example, researchers may be able to determine the efficacy of drugs in improving cognition using similarly unobtrusive technology.

“It’s easy to see how we can also use these kinds of apps to track symptoms associated with neurological diseases like Parkinson’s and Alzheimer’s disease,” she said.