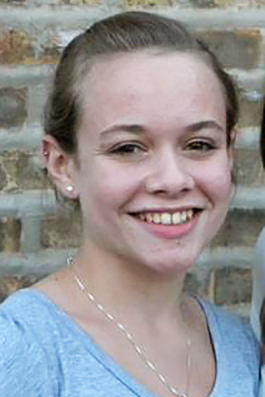 Josephine Chaet unsuccessfully applied for a Fulbright prior to earning bachelor’s degrees in anthropology and history from Grinnell College in 2016.

Through determination and the advancement of her graduate studies at UIC, she was rewarded in her latest bid for the competitive grant, which will support nine months of fieldwork in Jordan during the next academic year.

“I think that receiving the Fulbright two years later is evidence of the ways in which my own conceptualization and understanding of my research has developed and makes me even more excited to dive into the research and grateful to have been given the opportunity than I would have been right after graduating from my undergraduate institution,” said Chaet, a graduate student in anthropology.

Chaet, a Chicago native and 2012 graduate of Lincoln Park High School, will travel in September to Amman, where she spent last summer conducting preliminary research with the support of the UIC Chancellor’s Graduate Research Award and intensive Arabic language study through the U.S. Department of State’s Critical Languages Scholarship program.

“My work examines how women’s organizations draw upon the political subjectivities of their female members to effectively operate within, adapt to, and contest state policies, legislatures and bureaucracies,” she said.

Her project focuses on four women’s organizations in Jordan — the Arab Women’s Organization, the Jordanian National Commission for Women, the Jordanian Women’s Union, and the Sisterhood is Global Institute — and the ways in which the women involved in those organizations work with and against state structures to advocate for legislative change throughout the country.

“In doing so, this project aims to be an intervention in the academic understanding of women’s political engagement by focusing on that involvement within the particular context of a parliamentary monarchy in the Middle East,” she said.

Chaet has also won a fellowship offered by the American Center of Oriental Research and the Council of American Overseas Research Centers (ACOR-CAORC). Funded by the State Department’s Bureau of Educational and Cultural Affairs, the award will allow her to stay in Amman to conduct additional fieldwork through mid-August 2019 before returning to UIC to start work on her dissertation.