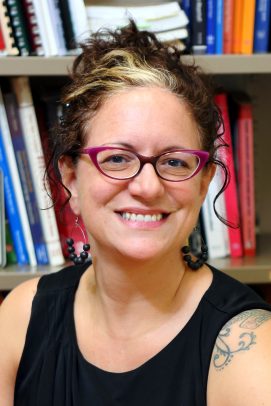 How can language instruction in the U.S. be improved? It’s a burning question for Kim Potowski, professor of Spanish linguistics in the department of Hispanic and Italian studies.

She says educating through two languages from the age of 5 is optimal.

“Not only does that model teach monolingual kids another language, but it also helps Latino, Chinese and kids from other groups maintain their languages, as well. It’s such a no-brainer,” said Potowski, a sought-after presenter on teaching, teacher education and bilingual education.

Her international research, which focuses on Spanish sociolinguistics, heritage language development and multilingual education, aims to address the matter and feeds directly into her teaching.

Potowski has been awarded eight grants and fellowships, including a Fulbright, for work related to the educational experiences of Spanish-speaking youth. She has been part of three federal grants with the Chicago Public Schools, including training best practices in teaching Spanish to heritage speakers – students who grew up with exposure to oral Spanish but who need support in literacy and academic language.

Under her direction since 2002, UIC’s Spanish for Heritage Speakers program has tripled in size and now serves more than 900 students per year.

Potowski’s undergraduate courses, which focus on either Spanish in the U.S. or Spanish around the world, examine various facets of language, such as racism, society, power and culture.

“The Spanish in the U.S. course can be transformative in the lives of our Latino students, because I’m teaching a course about how they speak,” she says. “They’ve been exposed to a number of pernicious ideas about any language that isn’t English, but also they get guff for the ways they speak Spanish.”

For a final project, her students have to analyze some aspect of Chicago Latinidad, in particular, the spaces and ways in which Spanish is used locally. The projects involve conducting interviews and uploading a student-made video to a website, allowing them to create an artifact of Chicago Spanish that students exchange for similar regional research done at other campuses, such as the University of Arizona and Columbia University.

“Here they don’t know about the migrant farm workers movement in the Southwest, the ‘Nuyoricans’ in New York, the Cubans in Miami, or the cherry pickers in Washington,” she said. “This project allows them to look at Latinidad across the U.S. in a broader sense and share a piece of Chicago with those that don’t know about Chicago Latinidad.”

She enjoys watching her students grow over the course of the semester.

“I like to think a lot of them become sort of linguistically more sophisticated and their linguistic self-esteem is bolstered,” explained Potowski, who has written numerous articles on the construction of heritage-speaker classes and two textbooks for teachers working with heritage speakers.

In addition, she has designed and led a four-week study abroad program in Oaxaca, Mexico, for heritage speakers, and also helped fund scholarships for students in the program, which will restart for its third year this summer.

As the designer of UIC’s Master of Arts in Teaching Spanish, Potowski has been an important instructor and mentor to many graduate students, including some who have earned tenured professorships and one leading a dual-language program of her own.

“Given UIC’s demographics, I have enjoyed multiple opportunities to study and share my work with Latino students, who continually inspire and teach me about themselves and their communities,” she said.