The signing, with Quinn using more than 110 pens, made Illinois the 16th state to adopt marriage equality.

Quinn inked the bill on the wooden desk where Abraham Lincoln wrote his first inaugural address — the speech in which he called on Americans to listen to “the better angels of our nature.”

Police estimated that 2,300 people witnessed the ceremony at the UIC Forum.

The governor noted that Tuesday was the 150th anniversary of Lincoln’s Gettysburg Address, with its declaration that “all men are created equal.”

But the first speaker was a student, Jennifer Geiman, who said the legislation “signifies that I and the diverse queer community at UIC will finally be able to marry who they love in the state where they live.”

Next to speak was Lt. Gov. Sheila Simon.

Lisa Madigan, wearing a necklace she received from the late senator and gubernatorial candidate Dawn Clark Netsch, praised the legislative courage that recognized “marriage is about the principles of fairness and freedom — and it’s about families.”

The measure is an example of “civil rights, human rights and equal rights,” said Secretary of State Jesse White. State Comptroller Judy Baar Topinka got the biggest laugh of the event when she announced, “I will be available to be a flower girl.”

Preckwinkle struck a political note with her observation that “none of the Republican candidates for governor have had the courage to stand up for this issue.”

Emanuel said, “There is no straight marriage or gay marriage — from now on there is only marriage in the state of Illinois.”

Michael Madigan said he was “happy to have worked on behalf of this bill” and praised State Rep. Greg Harris, who led the campaign in the House, and Ill. Sen. Heather Steans, chief sponsor in the Senate.

He too quoted Lincoln: “I walk slowly but I never walk backward.”

“Two years ago we passed the civil union law, but learned it was far from equality. Justice could not be denied,” Steans said.

Patrick Bova stood at the podium next to his partner of more than 50 years, Jim Darby, and announced, “We can finally be newlyweds.”

The ceremony was led off by the Artemis Singers, including Patricia O’Brien, associate professor of social work. The group sang “On the Street Where You Live,” “One Fine Day” and “We Are Family.”

“It’s nice that such a big event is happening on campus,” said architecture student Jessica Cavallaris, sitting in the audience.

Later, the Chicago Gay Men’s Chorus added their voices with “America the Beautiful.”

“It means I can get married.”

— Matt O’Connor contributed to this story 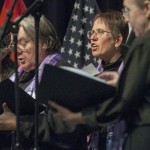 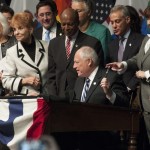 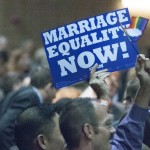 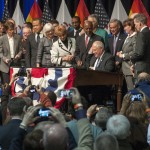