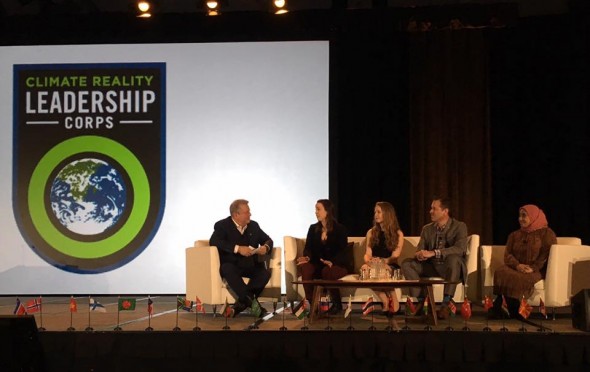 In the fall of 2015, Lucia Whalen was selected to attend the Climate Reality Project’s Leadership Corps conference.

Fast forward 18 months. Whalen joined Gore onstage as a featured panelist to share her personal story and passion for sustainability activism during the Corps training in Denver in March.

The panel was livestreamed on Facebook by Climate Reality and the UN Foundation. 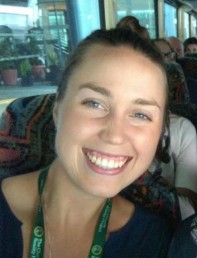 “He’s really good at making people feel comfortable onstage and continuing conversation,” said Whalen, who received her bachelor’s in English with a concentration in creative nonfiction writing in December. “I got so much feedback from conference attendees who appreciated me representing people who aren’t necessarily in the environmental industry.”

Personal health issues and interests, along with a Climate Reality presentation held at UIC, led her to explore environmental matters further.

“I’m unique as an English major and someone who didn’t study environmental science,” said the former Honors College member. “More people are concerned about this issue now and are seeing how important it is to take action.”

As a student, Whalen was an intern for the Heritage Garden project and a student leader intern with the Office of Sustainability, where she developed a battery and pen recycling program on campus.

She studied the health impacts of agricultural runoff on the Great Lakes, gentrification implications of remediation and development along the Chicago River, and the rhetoric and metaphors used around climate change.

She credits that combination of experiences, which included public speaking opportunities, for preparing her to serve as a Climate Reality leader.

“Climate change isn’t just for scientists to address,” she added. “It affects everybody.”

In addition to her speaking and mentorship work on behalf of Climate Reality, she co-authors a sustainability blog, and writes and edits a blog for the Art of Living foundation, a meditation, wellness and humanitarian organization.

“The Great Lakes is one of the most important issues to be working on while living in the Midwest,” she said. “I really appreciate doing work where I came from and contributing back to the community that raised me.”