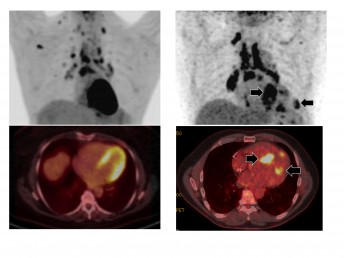 Researchers at the University of Illinois at Chicago were able to reduce uncertainty in diagnosing cardiac sarcoidosis by having patients consume a high-fat, low-sugar diet for 72 hours prior to diagnostic imaging.

Sarcoidosis, an inflammatory disease that attacks multiple organs, particularly the lungs and lymph nodes, disproportionately affects African Americans. Pulmonary fibrosis is the number-one cause of death among sarcoidosis patients, and sarcoidosis that affects the heart is second.

But diagnosing cardiac sarcoidosis  is very difficult, says Dr. Yang Lu, assistant professor of radiology in the UIC College of Medicine and corresponding author on the study, published online in Clinical Nuclear Medicine.

“Up until now, diagnosis is made by expert opinion based on the results of several testing techniques including imaging,” Yu said. “But what these scans show is often ambiguous, and so using them to definitively diagnose cardiac sarcoidosis is problematic. There is really currently no gold standard for diagnosing cardiac sarcoidosis.”

Positron emission tomography (PET) scans, and computed tomography (CT) scans, as well as scans that combine information from each, have been used to diagnose cardiac sarcoidosis, but the results have been hard to interpret.

The scans require the patient to first be injected with a short-lived radioactive tracer called fludeoxyglucose. FDG is very similar to glucose, the main sugar used by the body for fuel. FDG tends to concentrate in cells with very high metabolic rates that use lots of sugar for energy, such as cancer cells and neurons, and cells affected by inflammation, like heart cells affected by sarcoidosis. Healthy heart cells are metabolically flexible – they can use either fat or sugar for energy.

To reduce the amount of sugar, and therefore FDG, taken up by healthy heart cells, doctors often have patients consume a high-fat, low-sugar diet for 24 hours prior to imaging. The healthy heart cells preferentially use the abundant fat for fuel, so cells affected by disease that use sugar stand out more clearly on the scans.

“When we used this method, we noticed that the results were not satisfactory,” Lu said. “The unpredictable uptake of FDG by healthy heart cells makes the scans hard to read.” A little under half of the scans preceded by 24 hours of the special diet were not useful for diagnosis, Lu said.

One sarcoidosis patient scheduled for a scan came in a day late for their scheduled appointment.

“The patient had been following the high-fat, low-sugar diet for two days at that point instead of the usual 24 hours,” Lu said. When they scanned the patient, the areas where the heart picked up the FDG were much clearer, and showed active cardiac sarcoidosis.

“More excitingly, these abnormal areas were in the same location as abnormal findings from the patient’s cardiac MRI, which was indicative of cardiac sarcoidosis,” Lu said. There was almost no pickup of FDG in the rest of the heart.

“We were very confident that this patient did, indeed, have cardiac sarcoidosis,” he said.

Based on this incidental observation, Lu and his colleagues set out to determine how 72 hours of the high-fat, low-sugar diet in advance of scans would affect the images. They looked at 215 tests from 207 patients at the University of Illinois Hospital in 2014 and 2015.

The patients consumed a high-fat, low-sugar diet for either 24 or 72 hours before their scans.

Forty-two percent of patients in the 24-hour diet group had indeterminate results.

“We just could not say, based on the scans, if they had cardiac sarcoidosis or not,” Lu said.

In contrast, only 4 percent of patients in the 72-hour group had indeterminate results, and Lu and his colleagues were able to say with a high degree of confidence whether or not these patients had cardiac sarcoidosis.

“By following the diet for three days instead of one, the unpredictable but normal uptake of sugar by healthy heart cells was suppressed, so we could be more confident that areas that picked up the FDG had a very high likelihood of being affected by sarcoidosis, and this minimized the number of indeterminate findings where we can’t make a diagnosis,” Lu said. The technique will also allow clinicians to better-follow their patients’ progress under treatment for sarcoidosis, he said.