The reward center of the brain is much more attuned to the pleasurable effects of alcohol when estrogen levels are elevated, an effect that may underlie the development of addiction in women, according to a study on mice at the University of Illinois at Chicago.

Led by Amy Lasek, assistant professor of psychiatry in the UIC College of Medicine, researchers found that neurons in a region of the brain called the ventral tegmental area, or VTA (also known as the “reward center”), fired most rapidly in response to alcohol when their estrogen levels were high. This response, according to their findings published online in the journal PLOS ONE, is mediated through receptors on dopamine-emitting neurons in the VTA. 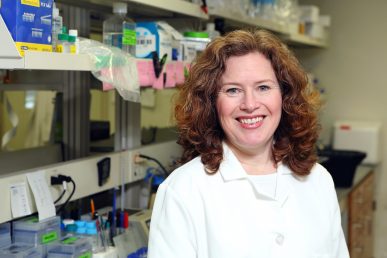 “When estrogen levels are higher, alcohol is much more rewarding,” said Lasek, who is the corresponding author on the paper and a researcher in the UIC Center for Alcohol Research in Epigenetics. “Women may be more vulnerable to the effects of alcohol or more likely to overindulge during certain stages of their cycle when estrogen levels are higher, or may be more likely to seek out alcohol during those stages.”

Studies indicate that gender differences in psychiatric disorders, including addiction, are influenced by estrogen, one of the primary female sex hormones. Women are more likely to exhibit greater escalation of abuse of alcohol and other drugs, and are more prone to relapse in response to stress and anxiety.

The VTA helps evaluate whether something is valuable or good. When neurons in this area of the brain are stimulated, they release dopamine — a powerful neurotransmitter responsible for feelings of wellness — and, in large doses, euphoria. When something good is encountered — for example, chocolate — the neurons in the VTA fire more rapidly, enforcing reward circuitry that encodes the idea that chocolate is enjoyable and something to be sought out. Over time, the VTA neurons fire more quickly at the sight, or even thought of, chocolate, explained Lasek. In addiction, VTA neurons are tuned into drugs of abuse, and fire more quickly in relation to consuming or even thinking about drugs, driving the person to seek them out — often at the expense of their own health, family, friends and jobs.

Many animal studies have shown that alcohol increases the firing of dopamine-sensitive neurons in the VTA, but little is known about exactly why this occurs.

Lasek and her colleagues examined the relationship between estrogen, alcohol and the VTA in female mice. They used naturally cycling mice that were allowed to go through their normal estrous cycles, akin to the menstrual cycle in women.

Mice were evaluated to determine when they entered diestrus — the phase in the estrous cycle when estrogen levels are close to their peak.

“In mice in diestrus, estrogen levels increase to about 10 times higher than they are in estrus, the phase in which ovulation occurs and estrogen levels drop,” Lasek said. 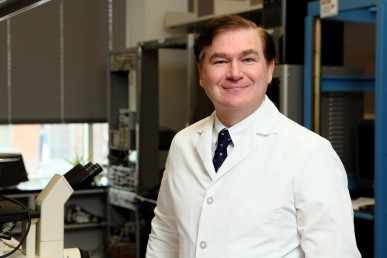 Mark Brodie is professor of physiology and biophysics and a researcher in the UIC Center for Alcohol Research in Epigenetics in the UIC College of Medicine. Photo: Jenny Fontaine.

“The increased reward response to alcohol we see when estrogen levels are high is mediated through receptors for estrogen in the VTA,” said Mark Brodie, professor of physiology and biophysics in the UIC College of Medicine and a co-author on the paper.

Lasek believes that the increased sensitivity to alcohol in the VTA when estrogen levels peak may play a significant role in the development of addiction in women.

“We already know that binge drinking can lead to lasting changes in the brain, and in women, those changes may be faster and more significant due to the interaction we see between alcohol, the VTA and estrogen,” Lasek said. “Binge drinking can increase the risk of developing alcoholism, so women need to be careful about how much alcohol they drink. They should be aware that they may sometimes inadvertently over-consume alcohol because the area of the brain involved in alcohol reward is responding very strongly.”

Bertha Vandegrift and Chang You from the department of physiology and biophysics at UIC, and Rosalba Satta from UIC’s department of psychiatry, are co-authors on the paper.