How does alcohol influence the development of Alzheimer’s disease?

Research from the University of Illinois at Chicago has found that some of the genes affected by alcohol and inflammation are also implicated in processes that clear amyloid beta — the protein that forms globs of plaques in the brain and which contributes to neuronal damage and the cognitive impairment associated with Alzheimer’s disease. 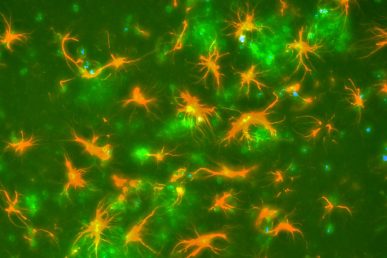 Previous studies investigating the effects of alcohol consumption on Alzheimer’s disease have been controversial — some have indicated that alcohol has a protective effect, while others have pointed to a deleterious role for alcohol in the development of this neurocognitive disease. Recent research has suggested that alcohol consumption, and its impact on the immune system and inflammation in the brain, may be the vehicle through which alcohol might exert its influence on the development of Alzheimer’s disease, but no previous studies have directly evaluated which genes are affected by alcohol in cells in the brain involved in protecting against Alzheimer’s disease.

Dr. Douglas Feinstein, professor of anesthesiology, and Dr. Sergey Kalinin, assistant professor of anesthesiology both at the University of Illinois at Chicago College of Medicine, along with other researchers conducted a cell-based study which suggests that alcohol may impede the clearance of amyloid beta in the brain. Their results are published in the Journal of Neuroinflammation.

Feinstein and his colleagues wanted to determine which genes were affected by both alcohol and high levels of inflammation in microglial cells. These are cells that support neural cells in the brain and elsewhere in the body. One of their functions is to engulf and digest the amyloid beta protein plaques characteristic of Alzheimer’s disease in a process known as phagocytosis. Microglial cells are also known to express high levels of inflammatory markers due to chronic alcohol exposure.

The researchers exposed rat microglial cells to alcohol, pro-inflammatory chemicals called cytokines, or alcohol and cytokines in the lab for 24 hours, and then looked at changes in gene expression under each condition. They also looked at the impact of alcohol exposure on the cells’ ability to engulf amyloid beta.

They found that gene expression was altered for 312 genes under the alcohol condition; for 3,082 for the pro-inflammatory condition, and 3,552 for the alcohol and pro-inflammatory condition. Changes in gene expression — either an increase or decrease in expression compared to normal levels — averaged about 16 percent and ranged from a 50 percent decrease to a 72 percent increase. Just a handful of genes were involved in both phagocytosis and inflammation.

“Among the genes we saw altered were many involved in phagocytosis, which is the first time this has been shown,” Feinstein said. “While these studies were performed in isolated cells, our results suggest that alcohol impedes the ability of mircroglia to keep the brain clear of amyloid beta and may contribute to the development of Alzheimer’s disease.”

After the researchers exposed the cells to alcohol levels at doses that are comparable to those found in humans after binge drinking or in heavy drinkers, they found that microglial phagocytosis was significantly suppressed by about 15 percent after one hour. “We didn’t continue the study to see whether phagocytosis was further impaired after longer exposures to alcohol,” Feinstein said, “but it appears that these changes in microglial cells could be a contributing factor to the development of Alzheimer’s disease.”

This research was supported in part by grant P50AA-022538 from the National Institute on Alcohol Abuse and Alcoholism and a Research Career Scientist award from the Department of Veterans Affairs.