How does the gut microbiome influence breast cancer?

Researchers from the University of Illinois at Chicago and the University of Chicago have received a three-year, $900,000 Defense Department grant to investigate how the gut microbiome – the trillions of bacteria, viruses and other bugs that make our digestive systems their home – influences breast cancer. 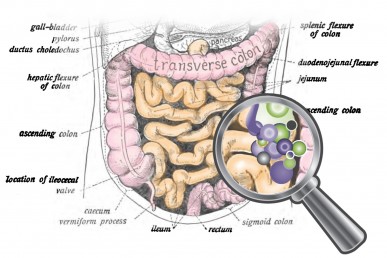 Jun Sun, associate professor of gastroenterology and hepatology in the UIC College of Medicine, and Tao Pan, professor of biochemistry and molecular biology at the University of Chicago, will look at how a molecule called queuine made by gut bacteria is related to breast cancer.

“Gut microbiota represents a complex ecosystem that develops in close parallel with hosts,” says Sun. “Perturbations or abnormalities in the mixture of microbes that make up the microbiome can lead to altered host responses that increase the risk of diseases.”

Queuine is produced by certain gut bacteria and is taken up through the intestine as a micronutrient and circulated in the blood. Cells use queuine to modify tRNAs — a set of molecules used by cells to translate the genetic message of DNA into proteins. Queuine-modified tRNAs are more accurate and efficient in making proteins.

Previous research has shown that abnormal levels of tRNAs are associated with increased risk for breast cancer. But researchers have not yet pinned down if and how queuine may play a role.

The researchers think that breast tumors may have high levels of queuine-modified tRNAs that speed up protein production as required by rapidly dividing cancer cells.

“If we know that a certain level of queuine produced by the gut microbiome increases risk for breast cancer, we may be able to design therapies to alter the amount of queuine, as part of a therapeutic approach to preventing or treating breast cancer in patients.”

The researchers will look at how queuine affects tRNA function and breast cancer growth in mouse models of breast cancer and in breast tumor tissue.