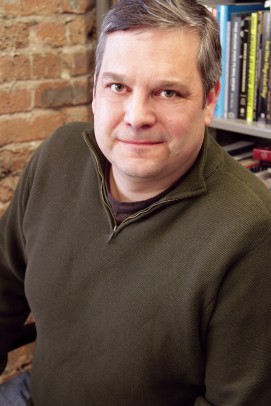 Nik Theodore was ranked one of the most highly cited scholars in the world. Photo: S.K. Vemmer

When Nik Theodore’s colleagues praise his prolific and globally influential research, he can look to data to be assured that they’re not just flattering him.

Thomson Reuters’ 2014 ranking of the most highly cited scholars in the world listed Theodore among the top 1 percent, which included just 177 social scientists (only two of whom were urban planners) “who are on the cutting edge of their fields.”

He also received an outstanding score of 35 on the h-index as calculated by Google Scholar, which is based on a researcher’s most cited papers and the number of citations in publications — 7,866 in Theodore’s case.

But the broader measure of Theodore’s work can be seen in its impact well beyond academia.

“I am a visiting researcher at the African Centre for Cities of the University of Cape Town,” Theodore said. “Here, we’re exploring research strategies for better understanding the dynamics of informal economies.”

“Nik’s research resonates with the public policy community as it grapples with labor issues, workforce development and pay equity,” said Michael Pagano, dean of the College of Urban Planning and Public Affairs.

“His work over 10 years ago was influential in Illinois’ increase of the state minimum wage,” Charles Hoch, professor of urban planning and policy and a 2007 University Scholar, wrote in his nomination letter.

Theodore focuses on neoliberalism as it affects workforce development, workers’ rights and the informal economy. He was named editor of a leading international journal, Antipode: A Journal of Radical Geography, two years ago.

Pagano notes that Theodore is “the complete scholar,” giving time not only to research, but also to faculty governance, administrative responsibilities, and students.

Theodore serves as associate dean for faculty affairs and research in the College of Urban Planning and Public Affairs.  He also is a senior fellow of the Great Cities Institute and a faculty affiliate to the Latin American and Latino Studies program.

“His doctoral students have landed prestigious positions at institutions such as the University of North Carolina at Chapel Hill, “ Pagano said.